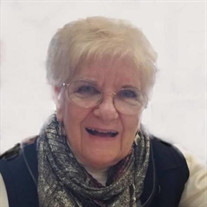 Joanne K. Frock, 81, of Hanover, cherished wife of J. Daniel Frock, passed away peacefully on Thursday, October 8, 2020, at her home following a courageous battle with Progressive Supranuclear Palsy (PSP). Joanne and Dan were married in Wildwood Crest, NJ, in 1959, and recently celebrated their 61st wedding anniversary on August 7th. Born on Tuesday, October 3, 1939, in Hanover, she was a daughter of the late Francis Augustus and Cecilia Neiderer Klunk. A proud graduate of the 1957 class of Delone Catholic High School, she remained a lifelong supporter of Delone. She was a devoted homemaker and along with her best friend, Bev, formed the Paper Dolls and enjoyed hanging wallpaper for many years. Joanne was raised Catholic but later became a faithful member of Emmanuel United Church of Christ. Over her years, she was a Greeter, Usher, Nursery Attendant, taught Sunday School, and was a member of the choir, Altar Guild and the Lay Life and Work Committee. In addition, she taught and served as President of the Vacation Bible School, was a Cub Scout Den Mother for many years, was a wall paperer for church projects and participated with placing memorial bricks in church courtyard. Joanne had a passion for flowers and gardening. She also enjoyed traveling with her husband, Dan, across the United States and in Europe. In 2018, she and her entire family vacationed to Marco Island, FL; a favorite location frequented for near 30 years. She was a member of various card clubs, one of which included the 1957 class of Delone. Joanne had a strong bond with Dan’s 1958 class of Eichelberger High School making trips to Ocean City, NJ; Chicago for tapings of the Oprah Winfrey Show; London, England; Scotland and many other locations. Over the past three years, Joanne was lovingly cared for in her home by special ladies with the Visiting Angels(VA) of Hanover. Specifically, with her until her final days were Kim, Karen, Sara and Trisha; additionally, the exceptional management of VA and several other VA ladies that cared for her over the past few years. The family will be forever grateful to all of them for their kindness and devotion to Joanne. Survivors include her three children, Carole F. Baublitz of Hanover, John D. Frock and his wife, Bonnie, of Littlestown, and Julie F. Sanders and her husband, Bill, of Matthews, NC; four grandchildren, Katie Carrick and her husband, Zac, Ali Baublitz, and Joey and Jake Crapster; one great-grandson, AJ Carrick; two sisters, Judy Dettinburn of New Oxford and Jean Sloan and her husband, Ray, of Abbottstown; six nieces and eight nephews. She is predeceased by two brothers, Richard and Ronald Klunk. The family will receive friends from 6 to 8 PM Monday, October 12, 2020, at Panebaker Funeral Home & Cremation Care Center, Inc., 311 Broadway, Hanover. A private service will be held and burial will be at Rest Haven Cemetery. In compliance with health and public safety directives, those attending the visitation will be required to wear masks, be socially distanced and attendance will be limited. The private service will be live streamed on the memorial tribute page Tuesday, October 13, 2020, at 2:00pm, at https://www.panebakerfuneralhome.com/obituaries/Joanne-Frock/#!/PhotosVideos In lieu of flowers, memorial contributions in memory of Joanne and her class of 1957 may be made to the Delone Catholic Fund (Delone Catholic High School), 140 S. Oxford Avenue, McSherrystown, PA 17344.

The family of Joanne K. Frock created this Life Tributes page to make it easy to share your memories.

Send flowers to the Frock family.