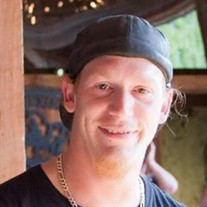 Jessie G. “Ginger” Carbaugh, 29, of Gardners, entered into God’s eternal care on Saturday, May 23, 2020. Born on Tuesday, June 5, 1990, in Gettysburg, he was the son of Daniel G. Carbaugh of Gardners and Lisa M. Monn of Hanover. Jessie was a 2009 graduate of South Western High School. He enjoyed playing pool, drag racing, four wheel drive “mudding”, spiders, and clowns. Surviving, in addition to his parents, are his step-father, Doug Leese; step-mother, Tina Glacken; three sisters Brittany and Courtney Leese and Ranee Cool; a brother Jojo Gonzalez; maternal grandparents, Larry and Pamela Monn, Carl and Nancy Leese; paternal grandparents, Charles and Denise Baker; maternal great-grandparents, Royce and Pearl Sebring; paternal great-grandparents, Galen and Anna Marie Baker; and numerous aunts, uncles, nieces, nephews and cousins. He was preceded in death by his maternal grandmother, Debra K. Carbaugh; and his paternal grandfather, Dan Carbaugh, Sr. In compliance with health and public safety directives, the service for Jessie will be held at a later date. The private viewing will be live streamed on their memorial tribute page at https://www.panebakerfuneralhome.com/obituaries/Jessie-Carbaugh/#!/PhotosVideos beginning at 2 PM on Tuesday, June 2nd. During this difficult time of private services, you may show your support joining our “Hugs from Home” program where your personal message is displayed in a meaningful way for the family to see. Your “Hug” message will remind the family of your love and support and may be sent to [email protected] and need to be received by 3 PM Monday, June 1st.

The family of Jessie G. Carbaugh created this Life Tributes page to make it easy to share your memories.

Send flowers to the Carbaugh family.