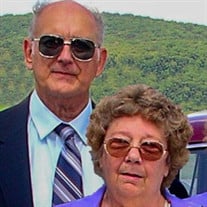 Dawn Marie Sandruck Williams, 79, passed away peacefully on Saturday, May 16, 2020 followed soon thereafter by her loving husband Roger Jerome Williams,81, on Sunday, May 17, 2020. Mr. and Mrs. Williams both died at Homewood at Crumland Farms in Frederick, MD from complications of COVID-19. They met at Conewago Dairy where Dawn was dipping ice cream and Roger decided then he did not want to let her go calling her “the love of his life”. Together they shared 62 years of marriage. A native of Hanover, Dawn was born on Friday, September 20, 1940 to the late Sterling Sandruck, Sr. and Annabelle Wolfe Sandruck. She was a 1958 graduate of Eichelberger High School and was a die cutter in the shoe industry, in Hanover, for many years. She later retired from ESAB Welding and Cutting Products in 2002. Roger was a native of Glen Rock and had lived in Hanover most of his life. He was born on Thursday, September 8, 1938 to the late Jerome and Elizabeth Bailey Williams. A 1956 graduate of Susquehannock High School, he was a noted basketball player. After 42 years of service, he retired in 2000 as a supervisor from Emeco Industries where he had been a welder for many years. Dawn and Roger were members of the Hanover Home Association, and enjoyed camping with extended family in their younger years, antiquing, going to flea markets and watching the Philadelphia Phillies together. In addition to her career, Dawn was a loving wife, mother and grandmother who took great pride in nurturing for her family. Roger was a member of the McSherrystown Home Association. Gifted with his hands, he will be long remembered for his handyman skills in making their house a home. The Williams’ are survived by three daughters, Starr Schaeberle and her husband, Jeffrey, of Frederick, MD, Pamela Legore and her husband, Kenneth, of Gettysburg, and Crystal Kling and her husband, David, of York; six grandchildren, Tyler Schaeberle, Alexander Schaeberle and his wife, Catie, Brandy Hershey and her husband, Matthew, Kenneth Legore and his wife, Tiffany, and Erika and Lee Kling; five great-grandchildren, Christian, Genesis and Elizabeth, Luke, Colton; and several nieces and nephews. Dawn is also survived by a sister, Beverly Swartz; a brother, Sterling Sandruck, Jr.; and Roger by two sisters, Mary Day and Alliene Coleman. In compliance with state and health directives during this time, a private service for Dawn and Roger will be held. The private viewing and service will be live streamed on their memorial tribute page at https://www.panebakerfuneralhome.com/obituaries/Dawn-And-Roger-Williams/#!/PhotosVideos beginning at 10:30 AM on Friday. During this difficult time of private services, you may show your support by leaving a message on our “Hugs from Home” program where your personal message is displayed at the funeral home in a meaningful way for the family to see. Your “Hug” message will remind the family of your love and support and may be sent to [email protected] and need to be received by 4 PM Thursday, May 21, 2020. In lieu of flowers, memorial contributions may be made to the Homewood Foundation for their Benevolent Fund, 7407 Willow Road, Frederick, MD 21702 or the Dementiasociety.org

The family of Dawn and Roger Williams created this Life Tributes page to make it easy to share your memories.