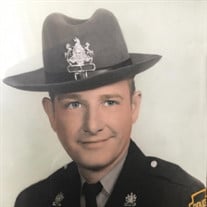 Witmer K. “Jack” Trone, 91, of Hanover, husband of Anna M. “Rick” Trone, entered into God’s eternal care on Monday, May 11, 2020 at Homewood at Plum Creek. Born on Tuesday, July 31, 1928 in Hanover, he was a son of the late Burnell K. and Hilda A. Witmer Trone. Jack was a 1946 graduate of Eichelberger High School and a 1964 graduate of the Pennsylvania State Police Academy, in Hershey. In 1986, he retired as a Sergeant with the Hanover Police Department after 32 years of service. He was also a security guard with the Conewago Valley School District for 17 years, and a licensed private investigator and bail bondsman. Jack served with the US Army, was a member of the Hanover Elks BPOE # 763, a life member of the VFW Post # 2506, and a charter member of the Fraternal Order of Police # 69 in Hanover. Surviving, in addition to his wife of 63 years, is a brother-in-law, Michael Zinn and his wife, Cynthia, of Hanover; two nieces, Holly Zinn and her husband, Shawn Marchio, and Hilary (Zinn) Bloom and her husband, Joshua; a nephew, Michael Zinn, II and his wife, Jennifer; numerous great-nieces and great-nephews; and one great-great-nephew. He was preceded in death by his sister, Louise Trone; and a brother, Irl Trone. In compliance with state and health guidelines during this time, a private graveside service for Jack will be held at Rest Haven Cemetery. In lieu of flowers, memorial contributions may be made to St. Matthew Lutheran Church, 30 W. Chestnut Street, Hanover, PA 17331 or to a charity of the donor’s choice.

The family of Witmer K. "Jack" Trone created this Life Tributes page to make it easy to share your memories.

Send flowers to the Trone family.