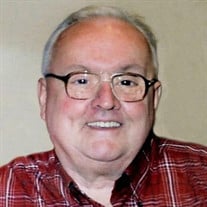 William G. “Bill” Hoke, 83, of Hanover, went to be with the Lord on Thursday, February 24, 2022. Born on Sunday, April 24, 1938 in Hanover, he was a son of the late Donald M. Hoke, Sr. and Ruth Kneller Hoke. He was also preceded in death by his wife of 55 years, Carmen D. Fink Hoke, who died in 2011; and a brother, Donald M. Hoke, Jr.; and a sister, Judith Lee. Bill was a 1956 graduate of Delone Catholic High School and was employed by Joe the Motorist, Malcolm Spinning Mills, and retired in 2004 as warehouse manager for Miller Chemical and Fertilizer. He was a lifelong member of St. Joseph Catholic Church and was a Past Grand Knight of the Hanover Knights of Columbus Council 871. Bill loved to vacation in Cape May, NJ with Carmen and the family. Bill and Carmen shared their love for schnauzers, which they had many in their lives. Following his retirement, he loved spending time on his pontoon boat on Codorus Lake and was an avid Baltimore Orioles fan. Survivors include four children, Timothy W. Hoke and his partner, Jack Mehling, Cynthia J. Wyatt and her husband, Hal, Lori A. Hoke, and Amy L. Brantner and her husband, Zach. Bill was a second father to Elizabeth Britcher (his “adopted” daughter. He is also survived by three grandchildren, Kristy Reese-Zelei, Thomas “TJ” Reese and his wife, Andrea, and Drew Carbaugh; five great-grandchildren, and Olivia and Sofia Zelei, and Ophelia, Lincoln and Ezra Reese; two brothers, John R. Hoke and his wife, Elaine, and Joseph Hoke; and numerous nieces and nephews. A Memorial Mass will be said at 1:00 PM Wednesday, March 2, 2022 at St. Joseph Catholic Church, 5125 Grandview Road, Hanover. The family will receive friends at the church one hour prior to the service. Burial will be private and at the convenience of the family. In lieu of flowers, memorial contributions may be made to Delone Catholic High School, 140 S. Oxford Avenue, McSherrystown, PA 17344.

The family of William G. Hoke created this Life Tributes page to make it easy to share your memories.

Send flowers to the Hoke family.