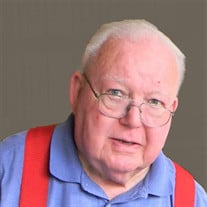 William H. “Bill” Bittinger, Jr., 91, of Hanover, entered into God’s eternal care on Tuesday, March 16, 2021 at UPMC Hanover Hospital. Born on Friday, February 14, 1930 in Hanover, he was the son of William H. Bittinger, Sr. and Catharine Smith Bittinger. He was preceded in death by his wife of 54 years, Barbara Smith Bittinger, who died in 2014. Bill graduated from Eichelberger High School in 1948, received a Bachelor’s degree from Bryant University in Providence, Rhode Island in 1950 and proudly served his country in the US Air Force during the Korean War. He was a licensed insurance agent with the C.A. Weber Agency for 24 years and was later employed by Weis Markets for ten years. He was a member of the First United Methodist Church of Hanover and had been a member of the former Lohr’s Memorial United Methodist Church, member and Past Exalted Ruler of the Hanover Elks BPOE # 763, member and past commander of the Harold H. Bair American Legion Post # 14, member of the AmVets Post # 22, and was a life member of the Hanover Fire Company. In his spare time, Bill loved to go fishing. Survivors include a son, Michael W. Bittinger and his wife, Tina, of Hanover; and two grandsons, Brandon and Austin Bittinger. Due to the COVID-19 pandemic, a private service will be held. In lieu of flowers, memorial contributions may be made to VNA of Hanover and Spring Grove, 440 N. Madison Street, Hanover, PA 17331.

The family of William H. Bittinger Jr. created this Life Tributes page to make it easy to share your memories.

Send flowers to the Bittinger family.