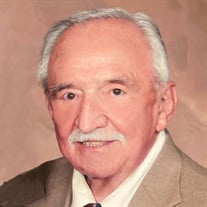 William (Bill) C. Biss, 84, of Hanover, PA passed away Friday, April 1, 2022 at UPMC Memorial in York, PA. He is survived by his loving wife, Emma Jane (Dillon) Biss; son William, daughter-in-law Cathy, grandchildren Cody and Caitie, and great-granddaughter Marlee; son David, daughter-in-law Maureen, and grandchildren Austin and Colleen. He is also survived by his brother, Lynn Biss, and sister, Carol (Biss) Kalmar. Born in Greensburg, PA, Bill graduated from high school at 16 and at 17 joined the U.S. Navy, where he served as an Electrical Technician. His early success optimizing radar on two different ships led to his first career as a pioneer in the semiconductor industry. Building upon his Navy experience and studies at Johns Hopkins University, he became an electronics engineer, and was recognized for his support of the Apollo 11 mission with his name inscribed on the lunar module. His next chapter saw success as a residential and commercial real estate broker spanning several states. Entrepreneurial pursuits along the way saw Bill founding a company that created synthetic diamonds and becoming proprietor of a lively local tavern. As he moved toward retirement, he put his life experience as an outdoorsman to work, becoming a sought-after shotgun shooting instructor. His enthusiasm for helping others grow in the discipline of Sporting Clays drove him to attain the National Sporting Clays Association Level III instructor certification – the organization’s highest level – as well as a Fellow in the Institution of Clay Shooting Instructors in the UK. He was also the founding Director of the Pennsylvania chapter of the Scholastic Clay Target Program, which promotes positive character traits and citizenship values to youths through participation in the shooting sports. Bill and Jane relocated to 22 different locations to accommodate their employment, including twice to England, which made it possible to explore a range of countries in Europe, including Scotland, Wales, Ireland, Greece, Spain, Portugal, Italy, France, Belgium, Austria, Germany and more. Some of their fondest travel memories include multiple visits to the Royal Edinburgh Military Tattoo, an annual event at Edinburgh Castle featuring an array of international military bands and artistic performance teams. Many years living in the American West led to plenty of outdoor adventures with their sons, including riding motorcycles through the Texas desert, hosting neighborhood pool parties in Arizona, and water skiing in Northern California. A passionate speaker, Bill joined Jane in becoming members of Toastmasters International, which teaches and promotes public speaking and leadership skills through a worldwide network of clubs. In their shared Toastmasters “career,” Bill and Jane both reached the highest level of achievement – Distinguished Toastmaster (DTM) – and founded several clubs in the U.S. and one in England. A lifelong dog lover, Bill teamed with Jane to raise numerous Airedale Terriers. Their last, and one of their most beloved, Alex, crossed the rainbow bridge years before and has been patiently waiting for Bill. We’re quite sure that her happy face was the first thing he saw, bounding towards him, moments after he slipped the bonds of earth. A viewing will take place on Thursday, April 7, from 3 p.m. to 4 p.m., followed by a service celebrating Bill’s life at 4 p.m., at Panebaker Funeral Home, 311 Broadway, Hanover.

The family of William C. Biss created this Life Tributes page to make it easy to share your memories.

Send flowers to the Biss family.