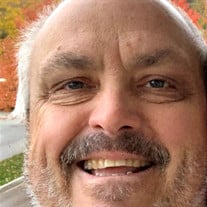 William “Bill” Schilling, 56, of Glenville, lost his two-year battle with cancer and passed away peacefully on the morning of January 29, 2020 at home, with his wife Kara by his side. Bill and Kara were married on September 7, 2013. Born on Friday, April 12, 1963, Bill grew up in Baltimore and was raised by his grandmother, Emily Schilling. He attended Loch Raven Senior High School and Maryland Institute College of Art. His long career behind the camera began as a surgical photographer for Johns Hopkins before he opened his own studio, Bill Schilling Photography. In recent years, he set up shop on his property where he continued to capture images for a close group of clients. Bill was "every unwanted dog's best friend," and gave many a second life at his "Cottage on the Hill." Bill enjoyed fishing, discovering rare finds at antique shops and auctions, and collecting fine Kentucky bourbons to share with friends. Bill was generous with his humor, friendship, and hospitality. He made an indelible mark on all who knew him. In addition to his wife, Bill is survived by a brother David Krieger of Vassar, MI, and others. Bill was preceded in death by his grandmother Emily Schilling (Hacker) and mother Diana Knak (Diver). The funeral will be held Saturday, February 1, 2020 at 11AM at Panebaker Funeral Home, 311 Broadway, Hanover with The Rev David Krieger officiating. The family will receive friends at viewings to be held from 2 to 4PM and 6 to 8PM on Friday, January 31 at the funeral home. In lieu of flowers, memorial contributions may be made to Pets of the Homeless, 400 West King Street, Suite 200, Carson City, NV 89703.

William &#8220;Bill&#8221; Schilling, 56, of Glenville, lost his two-year battle with cancer and passed away peacefully on the morning of January 29, 2020 at home, with his wife Kara by his side. Bill and Kara were married on September 7, 2013. Born... View Obituary & Service Information

The family of William "Bill" Schilling created this Life Tributes page to make it easy to share your memories.

Send flowers to the Schilling family.