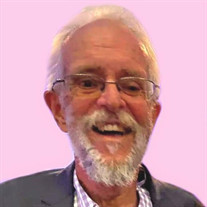 Wayne W. Wagner, 71, beloved husband of Anna J.(Doss) Wagner, passed away surrounded by his loving family, on Sunday, January 23, 2022, at UPMC Hanover Hospital. Born on Thursday, February 9, 1950, he was a son of the late Burnell W. and Louise A. (Thomas) Wagner. He was also preceded in death by his brother, Stephen A. Wagner; and his son, Jeremy Redding. Wayne was a graduate of New Oxford High School and went on to work as a welder for 30 years. He retired from Conewago Valley School District after 10 years as a custodian. Wayne will be best remembered for doing anything for anyone because “that’s the kinda guy I am.” Wayne’s grandchildren saw him as a legend for his retelling of his youthful shenanigans, like skateboarding down Hershey Heights Hill. He maintained that spirit by skydiving at the age of 68. Wayne was an amazing husband, father, son, brother, and uncle, who was always willing to help. His favorite place on earth was the beach, where he loved watching sunrises over the ocean. He was a lifelong hippie who enjoyed driving his wife in his VW Beetle. A quote from one of his favorite songs by Jackson Browne: “We got time to think of the ones we love while the miles roll away, but the only time that seems too short is the time that we get to play.” Wayne’s survivors, in addition to his wife of 37 years, include two daughters, Angela Britcher and her husband, Craig, and Brita Byers and her husband, Kevin; one son, Jason Redding and his wife, Ashley; one daughter-in-law, Lindsay Redding; nine grandchildren (each one his favorite); four great grandchildren; six siblings, Patricia Glass, Gary Wagner, Dawn Leatherman, Sharon Wyatt, Brenda Hundley, and Mike Wagner(every one of which he adored); and numerous nieces and nephews. Friends and family are invited to a Celebration of Life on Sunday, February 6th, from 1 to 4 pm at the New Oxford Social Club Pavilion, 200 W. Golden Lane, New Oxford, PA. Memorial contributions may be made to the Central Pennsylvania Blood Bank or the American Cancer Society.

Wayne W. Wagner, 71, beloved husband of Anna J.(Doss) Wagner, passed away surrounded by his loving family, on Sunday, January 23, 2022, at UPMC Hanover Hospital. Born on Thursday, February 9, 1950, he was a son of the late Burnell W. and Louise... View Obituary & Service Information

The family of Wayne W. Wagner created this Life Tributes page to make it easy to share your memories.

Send flowers to the Wagner family.