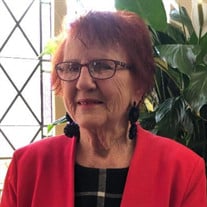 Vonnie J. (Woodward) Reichart, 77, of Hanover, beloved wife of Robert W. Reichart, joined hands with her Savior on Sunday, December 20, 2020 at her home. Following her courageous battle with pancreatic cancer, she died peacefully in her sleep after spending a special weekend of well wishes with her loving family. Born on Friday, January 15, 1943 in Gettysburg, she was a daughter of the late William Earl and Betty Fiscle Woodward. She is also preceded in death by a sister, Linda Kershner; a sister-in-law, Jane Poole; and brothers-in-law, Elven Chronister and Parker Coble. A 1960 graduate of Littlestown High School, Vonnie worked as a patient aide, a hospice volunteer, and as corporate secretary and treasurer of her husband’s well drilling company. In 2000, she served as First Lady of the National round Water Association and traveled extensively throughout the United States. After retiring in 2008, she devoted much of her time to Trinity United Church of Christ, as a church volunteer and the PALS lunch program. She enjoyed reading, gardening, travel and spending time with her grandchildren and great-grandchildren, especially by the pool. In addition to her husband of nearly 60 years, this hardworking mother is survived by four children: Colleen Miller and her husband, Randy, of Hanover; Wendy Rawls and her husband, Scott, of Greensboro, NC; Todd Reichart and his wife, Hope; and William Reichart, II and his wife, Abby, all of Hanover. A doting grandmother, she had nine grandchildren: Jordan Miller and his wife, Marianne; William “Wes” Reichart, III, and his fiancée, Stephanie Palm; Clay Reichart and his wife, Kyra; Garrett Reichart; Ella Rawls; Grant, Aaden, Kennedy and Welles Reichart. She was also blessed with two great-grandchildren, Harper and Chase Miller. Vonnie is also survived by a sister, Sandie Coble; a brother, William Woodward; sisters-in-law, Betty Chronister and Peggy Jamison; and brothers-in-law, Charles Kershner, Donald Jamison and Jon Poole. In keeping with Vonnie’s wishes, a private viewing will be held for her immediate family followed by cremation. A public memorial service will be planned when the COVID-19 crisis permits. The Reichart family would like to thank all the medical staff and personnel who helped in the lessening of Vonnie’s pain and suffering. Memorial contributions may be made to the Trinity United Church of Christ Endowment Fund, 116 York Street, Hanover, PA 17331 or the American Cancer Society, 1004 N. Juniata Street, Hollidaysburg, PA 16648.

Vonnie J. (Woodward) Reichart, 77, of Hanover, beloved wife of Robert W. Reichart, joined hands with her Savior on Sunday, December 20, 2020 at her home. Following her courageous battle with pancreatic cancer, she died peacefully in her sleep... View Obituary & Service Information

The family of Vonnie J. Reichart created this Life Tributes page to make it easy to share your memories.

Send flowers to the Reichart family.