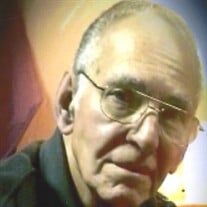 Tommy “Tom” Lee Brown, 77 of Hanover, husband to Dolly Brown, passed away while surrounded by his family on Saturday, September 15, 2018 at Hanover Hospital following a brief illness Born on Monday, September 30, 1940 in Anderson, TN, he was a son of the late William and Helen Jefferies Brown. He was also preceded in death by his sister and her husband, Billie Ann and Bill Key; two brothers, Ken and Bob Miller and a grandson, Bryan Guilmette. He met the love of his life with he was 15 and she was 13 and they married three years after their courtship began. On October 25, they would have celebrated 60 years of marriage and their song “Young Love” by Sonny James still remained true. He was a former resident of Twinsburg OH before moving to Hanover in 1985. He spent much of his career as a machinist with Black & Decker Corporation, but retired in 2012 as a security guard for the Paradise School for boys, a position he greatly enjoyed. He was a member of Victory Baptist Church in Hanover and was an avid Cleveland Browns fan. He enjoyed watching sports and history shows on television and he retained information that most others forgot. He enjoyed his cigarettes and coffee, but the joy of his life was spending time with his grandchildren. He was their biggest and often loudest cheerleader at their sporting events and always kept his family laughing at his antics. He had an addiction for sweets and was known for his love of cherry pies. In addition to his wife, he is survived by four daughters, Debbie Swikey and her husband, Paul of Newport Richey, FL, Donna Phillips of Midlothian, TX, Cindy Guilmette and her husband, Michael of Lake Park, GA and Helen Reed and her husband, Vandy of Hanover; a son, Bill Brown and his wife, Kathy of Spring Grove; 14 grandchildren, 7 great-grandchildren with a great-grandson due in November, a great-great-granddaughter and sister-in-law, Ethel Miller of Ohio. The family will receive friends at a viewing from 6 to 8 pm Tuesday evening at Panebaker Funeral Home and Cremation Care Center, Inc., 311 Broadway, Hanover with Pastor Jake Myers officiating a Prayer Service at 8 pm. Contributions may be made to assist the family with final expenses by visiting https://www.tmcfunding.com/search/campaign/2636?layout=single

The family of Tom Brown created this Life Tributes page to make it easy to share your memories.

Send flowers to the Brown family.