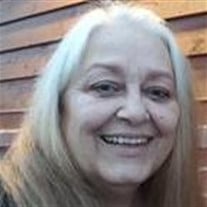 Theresa E. LaRosa Haladej, 66, of Spring Grove, wife of John T. Haladej, peacefully went to be with her Lord and Savior on Friday, August 16, 2019 at UPMC Hanover Hospital. Born on Monday, June 1, 1953 in Edgewood, MD, she was a daughter of the late Ernest Bernard LaRosa and Sally Elizabeth McVicker LaRosa. Theresa was a 1972 graduate of Edgewood (MD) High School and was a retired employee of Lowe’s in Hanover. A dedicated Christian, she was a member of St. Mary’s Evangelical Lutheran Church in Silver Run, MD who enjoyed studying and reading the Bible. She enjoyed crafting, gardening and doing ceramics. As a caring and giving person, Theresa always put others first and her greatest joy was spending time with her grandchildren. Surviving, in addition to her husband of 20 years, is her daughter, Brooke J. Sigmon Fermaint and her husband, Dario, of Odenton, MD; a son, Brenden L. Sigmon and his wife, Kayla, of Thomasville; five grandchildren, Serenity, Skyla and Spencer Sigmon, and Destyni and Dezarae Fermaint; a niece, Robin Blische and her husband, Henry, of Joppa, MD and her children, Christopher, Robbie, Lauren and Mason; former husband, Conrad Sigmon of Thomasville; mother-in-law, Margaret Sigmon; sister-in-law, Jamie Kepple and her husband, Chris, of Columbus, OH; and a large extended family. She was preceded in death by two sons, Norman Michael Miller and Blake Joseph Sigmon; her siblings, Nealie, Ernest, Michael and John LaRosa; and her father in law, Conrad Sigmon, Sr. The family will receive friends at a viewing to be held from 6 to 8 PM Thursday, August 22, 2019 at Panebaker Funeral Home & Cremation Care Center, Inc., 311 Broadway, Hanover. In lieu of flowers, memorial contributions may be made to the American Heart Association, 610 Community Way, Lancaster, PA 17603.

Theresa E. LaRosa Haladej, 66, of Spring Grove, wife of John T. Haladej, peacefully went to be with her Lord and Savior on Friday, August 16, 2019 at UPMC Hanover Hospital. Born on Monday, June 1, 1953 in Edgewood, MD, she was a daughter of... View Obituary & Service Information

The family of Theresa E. Haladej created this Life Tributes page to make it easy to share your memories.

Send flowers to the Haladej family.