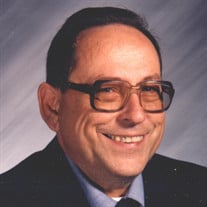 Theodore “Ted” Barnhart, age 82, of Hanover, entered God’s eternal care on March 11th, 2020. He was the son of the late Theodore and Blanche Barnhart. Born in Hanover on April 8th, 1937, Ted is survived by his wife Vesta B. Barnhart of fifty-nine (59) years; sons, Ted N. Barnhart, III, husband to Patricia (Patty) Barnhart, and Jay D. Barnhart, husband to Jenni L. Barnhart; and a brother, James (Jim) W. Barnhart. Ted was also grandfather to five grandchildren – Jackson L. Barnhart, Jacob T. Barnhart husband to Katie Barnhart, John N. Barnhart, Brooke E. Barnhart, and Drew M. Barnhart. Additionally, Ted was blessed with two great grandchildren, Jane Barnhart and Ridgely Nichols. Ted was a step grandfather to Saskia Roy, Marko Roy, wife Brittany and Phillip Roy. Three step great grandchildren of Leyanna Roy, Elijah Roy, Lamia Roy, Khalani Roy, and Mackenzie Roy. He was preceded in death by his daughter, Wendy T. Barnhart. Ted graduated from Hanover High School in 1955 and Shippensburg University in 1959. He taught at South Western High School as a Physics and Math teacher for thirty-seven (37) years and was the Head of the Science Department. He had a Master’s Degree from The College of William and Mary in Teaching Science with a major in Physics. In his first year of teaching, Ted met his future wife through a mutual friend. Ted was in the Pennsylvania Air National Guard Band for thirty-seven (37) years, as a percussionist. He also played as a drummer in a group called The Four Guys Band for thirteen (13) years on weekends and special occasions. Additionally, Ted drove a shuttle bus for the local vocational school for over ten (10) years. In retirement, Ted enjoyed spending time with friends, hunting, fishing, and playing golf. He grew up worshipping at the Trinity Church of Christ and then later at the Methodist church. A memorial service will be held at 3 PM Monday, March 16, 2020 at Trinity United Church of Christ, 116 York Street, Hanover with Pastor Brian Markle officiating. The family will receive friends following the service. In lieu of flowers, contributions can be made to Hanover Area Council of Churches, 136 Carlisle Street, Hanover, PA 17331 or a charity of your choice in his name.

The family of Theodore "Ted" Barnhart created this Life Tributes page to make it easy to share your memories.

Send flowers to the Barnhart family.