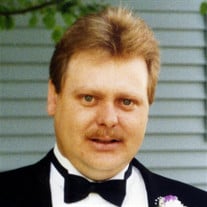 Terry L. Forry, 58, of Hanover and formerly of Spring Grove, entered into eternal rest on Sunday, November 4, 2018 at Manor Care South in York. Born on Wednesday, May 4, 1960 in York, he was the son of Helen Forry Klinedinst of Hanover and the late Thomas E. Forry. A 1978 graduate of Spring Grove High School, he had attended HVAC Technical School. Upon completion, he resided and worked in Maryland. Terry later returned to Pennsylvania where he was employed by the PH Glatfelter Company for the last 12 years and was a former employee of Pierce-Phelps Heating Ventilation and Air Conditioning in York. As an avid hunter, he enjoyed traveling and hunting in the western states. He enjoyed spending time with his friends and was a member of the Nashville Gun Club, Green Springs Rod and Gun Club, Spring Grove VFW Post # 5265, and the Hanover Loyal Order of Moose # 227. Surviving, in addition to his mother, is a sister, Linda Martin and her husband, Jeff; two nephews, William Wiest and his wife, Wendy, all of Spring Grove, Brandon Martin and his wife, Megan of Hanover; a niece, Kristi Cole and her husband, Doug, of Fayetteville, NC; four grand-nephews and three grand-nieces. In addition to his father, he was preceded in death by a grand-niece and twin grand-nephews. Following cremation, a memorial service will be held at 2 PM on Thursday, November 8, 2018 at St. Peter’s (Lischey’s) United Church of Christ, 5671 Lischey’s Church Road, Spring Grove with The Rev. Katherine Seiler officiating. Burial will follow in the church cemetery. The family will receive friends at the church one hour prior to the service. In lieu of flowers, memorial contributions may be made to the American Cancer Society, 924-N Colonial Avenue, York, PA 17403.

Terry L. Forry, 58, of Hanover and formerly of Spring Grove, entered into eternal rest on Sunday, November 4, 2018 at Manor Care South in York. Born on Wednesday, May 4, 1960 in York, he was the son of Helen Forry Klinedinst of Hanover and... View Obituary & Service Information

The family of Terry L. Forry created this Life Tributes page to make it easy to share your memories.

Send flowers to the Forry family.