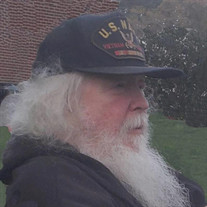 Stuart D. “Stu” Mize, 70, of East Berlin, husband of Linda J. Mize, entered into God’s eternal care on Wednesday, January 5, 2022 at UPMC Memorial Hospital. Born on Tuesday, March 27, 1951, he was a son of Harvey Mize and Joan Hodges. He proudly served his country in the US Navy during the Vietnam War and retired from Harley-Davidson after many years of service. Stuart was a life member of ABATE, a motorcyclist educational organization, and the Harold H. Bair American Legion Post #14. He enjoyed hunting, was a member of East Berlin Fish and Game Club, and was an avid MOPAR, Chrysler and Harley Davidson enthusiast. He attended New Life Assembly of God. Stu loved to play Santa Claus and in this same giving spirit and wanting to help others, he donated his corneas to a waiting recipient. In addition to his wife of 25 years, survivors include two step-children, Karen L. Henry and her husband, Stephen, of Hanover and Michael A. Kroft and his wife, Christy, of Littlestown; six grandchildren, Amanda, Stephanie, Katilynn, Electra, Tyler and Dakota; four great-grandchildren, Kaden, James, Madalyn and Briella; and a sister, Christina Mize. The funeral will be held at 7:00 PM Thursday, January 13, 2022 at Panebaker Funeral Home & Cremation Care Center, Inc., 311 Broadway, Hanover with Pastor Joel Everhart officiating. The family will receive friends at a viewing two hours prior to the service. In lieu of flowers, memorial contributions may be made to the Gift of Life Donor Program, 401 N. Third Street, Philadelphia, PA 19123.

The family of Stuart D. Mize created this Life Tributes page to make it easy to share your memories.

Send flowers to the Mize family.