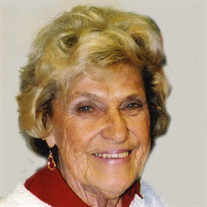 Statia Hamm Weaver, 92, of Hanover, entered into God’s eternal care on Tuesday, February 11, 2020 at Homewood at Plum Creek. Born on Sunday, December 4, 1927 in Hanover, she was the daughter of the late Melvin D. and Iva Thomas Hamm. She was also preceded in death by her husband of nearly 70 years, David C. Weaver, who died in 2016; her step-mother, Thelma Hamm; and a brother, Rev. Melvin Hamm. A 1945 graduate of Eichelberger High School, she later graduated from the Thompson Business School. Statia was a canteen manager at the YWCA in the 1960’s, and was a former employee at the Hanover High School cafeteria and at the Freeman Shoe Outlet before joining her husband at their business, Weaver Screen Printing. She was a member of Trinity United Church of Christ and a former member of the Hanover YWCA and the Order of the Eastern Star. Survivors include a daughter, Holly Weaver Korman; a son, Joel D. Weaver and his wife, Karen, all of Hanover; four grandchildren, Meegan Korman Lufburrow and her husband, John, Motique Korman Prin and her husband, Jonathan, and Aaron and Adam Weaver; and three great-grandchildren, Haley Statia Lufburrow, Gabriel David Lufburrow and Christopher David Prin. A private service is planned. In lieu of flowers, memorial contributions may be made to Trinity United Church of Christ, 116 York Street, Hanover, PA 17331.

Statia Hamm Weaver, 92, of Hanover, entered into God&#8217;s eternal care on Tuesday, February 11, 2020 at Homewood at Plum Creek. Born on Sunday, December 4, 1927 in Hanover, she was the daughter of the late Melvin D. and Iva Thomas Hamm.... View Obituary & Service Information

The family of Statia Hamm Weaver created this Life Tributes page to make it easy to share your memories.

Send flowers to the Weaver family.