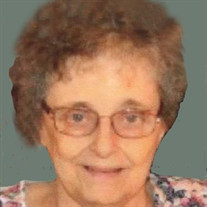 Shirley A. Kuhn, 82, of Hanover, entered into God’s eternal care on Monday, January 21, 2019 at Transitions Healthcare Nursing Home in Gettysburg. Born in Hanover, on Friday, September 4, 1936, she was a daughter of the late Alfred B. and Helen Mae Brown Kuhn. Shirley was a member of St. Vincent de Paul Church, Hanover. A 31 year employee of Freeman Shoes, she later retired from Homewood at Plum Creek after 15 years of service. A few of her pastimes included crocheting, with knitting being her favorite, creating many afghans for her much loved family. Shirley was an avid fan of the New York Yankees and Notre Dame Fighting Irish and enjoyed watching their ballgames. Survivors include four brothers, Patrick Kuhn and his wife, Connie, of McSherrystown, Francis Kuhn and his wife, Dawn, of East Berlin, William Kuhn and his wife, Margaret, and Daniel Kuhn and his wife, Sandy, all of Hanover; eight sisters, Gladys Myers, Rosalie Santana and Emma Kuhn, all of Hanover, Loretta Weaver of Gettysburg, Diane Hoffman and her husband, Hugh, of McSherrystown, Sharon Kuhn, and Carlin Thomas and her husband, Dale, all of Littlestown; and numerous nieces and nephews. She was also preceded in death by five brothers, Alfred P. Kuhn, Verley E. Kuhn, James V. Kuhn, Raymond B. Kuhn and Michael A. Kuhn; and three sisters, Helena T. Reck, Nancy E. Kuhn and Charlotte M. Smith. A Mass of Christian Burial will be said at 10:00 AM on Saturday, January 26, 2019 at St. Vincent de Paul Church, 220 Third Street, Hanover by The Rev. Michael P. Reid, II. Burial will follow in St. Vincent Cemetery. A viewing will be Friday from 6 to 8 pm at Panebaker Funeral Home, 311 Broadway, Hanover, with a rosary service at 8 pm.

Shirley A. Kuhn, 82, of Hanover, entered into God&#8217;s eternal care on Monday, January 21, 2019 at Transitions Healthcare Nursing Home in Gettysburg. Born in Hanover, on Friday, September 4, 1936, she was a daughter of the late Alfred B.... View Obituary & Service Information

The family of Shirley A. Kuhn created this Life Tributes page to make it easy to share your memories.

Shirley A. Kuhn, 82, of Hanover, entered into God’s eternal care...

Send flowers to the Kuhn family.