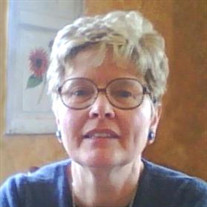 Sharon Ann Nichols, 75, of Hanover, died on Saturday, July 4, 2020 at Hospice and Community Care in Mount Joy after losing a courageous battle to a rare form of endometrial cancer (sarcoma). She was the daughter of the late John F. Minch, who... View Obituary & Service Information

The family of Sharon Ann Nichols created this Life Tributes page to make it easy to share your memories.

Send flowers to the Nichols family.