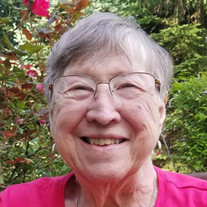 Sharon Hall McGonigal, 82, of Hanover, died peacefully and surrounded by family on Friday, August 9, 2019. Sharon was born on Monday, April 19, 1937 in Snow Shoe, Pennsylvania. She was a daughter of the late Frederick L. and Sarah E. Sherman Hall and was preceded in death by her husband of 56 years, L. Daniel McGonigal, a son, Shane Daniel McGonigal; a daughter, Stephanie Anne McGonigal; a sister, Patricia Lou Hughes; and two brothers, Dennis Hall and L. David Hall, MD. Sharon graduated from Snow Shoe High School in 1955 where she was active in band, pep club and softball. She pursued her desire for a career in nursing and went on to earn her degree as a Registered Nurse in 1958 from University of Pennsylvania School of Nursing. She continued to work at the University after graduation until returning to Snow Shoe in 1960 to marry her husband and begin their family. Sharon dedicated herself to nursing throughout her lifetime, beginning her career working in labor & delivery for more than 20 years. She continued her learning and transitioned to emergency nursing where she worked in the Hanover Hospital Emergency Department for 29 years while she passionately supported emergency nursing through being an active member of the Pennsylvania Emergency Nurses Association. Sharon continued working in emergency nursing until retiring at 74 years old in 2011 and continued to volunteer her time at the hospital after retirement. She received numerous nursing awards throughout her career the pinnacle of which was when she was awarded the National Emergency Nurses Association Lifetime Achievement Award in 2012, 57 years after she began her nursing journey. Sharon most enjoyed spending time with her family and friends and wanted nothing less than for everyone around her to find happiness. She spent her life in devotion to others, her love and compassion knew no bounds, her home no doors. A pillar of strength at home, at the hospital, and in the community, she selflessly comforted and cared for countless people. She was an active member of First United Methodist Church of Hanover. Among her passions were a love for baking, reading, and roses. Sharon is survived by her daughter, Michelle Lynn Tasker and her husband, Michael, of Hanover; two sons, Daniel Lewis McGonigal and his wife, Nadine, of Hatfield and Kevin Hall McGonigal and his wife, Nickie, of York; five grandchildren, David Michael Tasker, Nathan Michael Tasker, Michaela Grace Tasker, Quinten Frederick McGonigal and Brody Jonathan McGonigal; a great-grandchild due January 2020; three sisters, Jacqueline Granite of Camp Hill, Cynthia Butler and her husband, Ward, of Bellefonte and Marsha Hall of Baldwin, MD; and many nieces and nephews. Following cremation, a memorial service will be held at 3 pm on Sunday, August 18, 2019 at First United Methodist Church of Hanover with The Rev. Gregory A. Rapp officiating. Guests will have the opportunity to share stories and/or speak on Sharon's behalf during the ceremony. The family will receive friends one hour prior to the service in the church Parlor and immediately following the service in the church’s Gathering Place. Burial will be in Askey Cemetery in Snow Shoe at a later date. Memorial contributions may be made to First United Methodist Church, 200 Frederick Street, Hanover, PA 17331.

Sharon Hall McGonigal, 82, of Hanover, died peacefully and surrounded by family on Friday, August 9, 2019. Sharon was born on Monday, April 19, 1937 in Snow Shoe, Pennsylvania. She was a daughter of the late Frederick L. and Sarah E. Sherman... View Obituary & Service Information

The family of Sharon H. McGonigal created this Life Tributes page to make it easy to share your memories.

Send flowers to the McGonigal family.