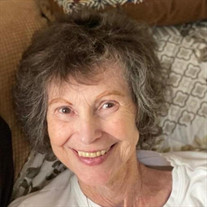 RuthAnn Sullivan Baublitz, 79, formerly of McSherrystown, died peacefully at her daughter’s home in Cosby, TN on Tuesday, December 15, 2020 following a courageous battle with lung cancer. Born on Friday, October 3, 1941 in Stoney Brook, PA, she was a daughter of the late Edward B. Sullivan, Jr. and Barbara Hibner Thoman and her husband, George Thoman. RuthAnn was preceded in death by her husband, Richard F. Baublitz, Sr. who died in 1996; a brother, Luther Sullivan; a sister, Bonnie Rohrbaugh and a stepson, Steven Baublitz. She owned her beauty salon for many years and later worked at Sealovers Beauty Shop for nearly 40 years. She was a member of the Harold H. Bair Post 14 American Legion and the Hanover Loyal Order of Moose #227 and held lifetime memberships with Hanover Home Association and Hanover VFW Post #2506. RuthAnn was an avid reader who loved going to the beach and playing 500 with her friends. Survivors include three daughters, Sharon Hull Lukens and her husband, Keith, of Hanover, Vickie Hull James and her husband, Neal, of Colorado Springs, CO, and Melissa Hull Smith and her husband, Brad of Cosby, TN; three step-children, Cindy Baublitz Eberman and her late husband, Jim, of Hanover, Richard F. Baublitz, Jr. and David A. Baublitz and his wife, Suki, all of New Oxford; seven grandchildren, Shane Lukens, Austin, Daulton, Morgan and MacKenzie James, and Nicholas and MicKayla Smith; several great-grandchildren; a step-brother, Eugene Thoman and his wife, Sandy; a step-sister, Dolores Markle and her husband, Kenny, all of Seven Valleys; and several nieces and nephews. Private services are planned for the summer. Memorial contributions may be made to St. Jude Children’s Hospital, 501 St. Jude Place, Memphis, TN 38105.

The family of RuthAnn Sullivan Baublitz created this Life Tributes page to make it easy to share your memories.

Send flowers to the Baublitz family.