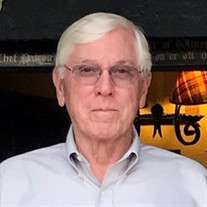 Ronald Gene Mattingly (aka Ron or Ronnie Gene), 80, of Hanover, beloved husband of Gail Thayer Mattingly, passed away peacefully on Tuesday, September 14, 2021, at his home with his family by his side. Born in Lebanon, Kentucky, to Susie and Walter Mattingly, he was the eldest of three brothers and is survived by his beloved brother Larry (Booty) Mattingly. From day one, Ron was full of life and possibilities. Voted prettiest baby in Marion County, he enjoyed many childhood friends whose friendship lasted a lifetime. Ron could play any song on the piano by ear and never met a stranger. Enlisting in the Air Force from high school, he was sent to Yale to learn Chinese, where he made many lifelong friends, including that of his honorary brother, Allen Alsop. Ultimately, he earned a degree in Chinese and a master’s in political science from the University of Maryland and enjoyed a long, storied career at the National Security Agency, retiring at 55 as the Deputy Director for the Training Directorate. This led to an adventurous retirement which included traveling all over the United States and the world, as well as an encore career working for his daughter, networking, and building new business with his many government agency contacts. Ron was a man who saw possibilities in houses, cars, and people. Give him an old house to rehab, a used car to buy and sell, or a person to encourage and love, he was the man for the job. Known as the fixer, builder, and Radar O’Reilly by many, if it could be built, fixed, or taken to the next level, Ron was the one to make that happen. Nothing ever stood in his way. As his granddaughter once wrote to him, “Mattinglys Never Quit,” and Ron was the epitome of that. Most of all, Ron loved to travel with his dear wife, Gail, and with family and friends, traveling all over the world, including most of Europe, China, Japan, and Russia. He also drove and flew his way across the United States. Nothing gave him greater pleasure than a spontaneous road trip, once driving from Pennsylvania to Connecticut for a grilled cheese sandwich. An honorary Yorkshireman, Ron spent many years living in the northern English towns of Ripon, Knaresborough, Ripley, and Harrogate, with his children and first wife, Ruth Mattingly, where he developed a second home and many friends, gaining another brother in his lifelong friendship with David Batchelor. Next to his love for family, travel, and DIY, his love of ice cream, pottering in his garden, and pretending not to like, but really loving the stray cats his wife,Gail rescued, gave him great pleasure. Ron lived a full, adventurous, and unique life and had many stories to share with his three children, Micheal, Sean, and Moira, and his nine grandchildren: Corwin, Chloe, Kasey, Emily, Riley, Juni, Sophie, Heidi, and Lucy, who all adored their Opa. They will continue his legacy of love of life, travel, learning, and most importantly,never giving up on their dreams. He was a unique man of vision who carved his own path, despite obstacles, and will be missed by many. A celebration of life memorial service will be held at 11AM on Sunday, September 26, 2021, at Panebaker Funeral Home, 311 Broadway, Hanover, with Certified Celebrant, Kasie J. Morris, officiating. The family will receive friends at a visitation one hour prior. In honor of Ron’s positive approach to life, colorful, casual dress is encouraged. In lieu of flowers, please send donations to the Visiting Nurse Association of Hanover and Spring Grove, 440 Madison St, Hanover, PA 17331, the Wounded Warrior Project, 4899 Belfort Road Suite 300, Jacksonville, FL 32256 or the Welcome Home Animal Rescue, 890 Emanuel Road, Lewisberry, PA 17339.

Ronald Gene Mattingly (aka Ron or Ronnie Gene), 80, of Hanover, beloved husband of Gail Thayer Mattingly, passed away peacefully on Tuesday, September 14, 2021, at his home with his family by his side. Born in Lebanon, Kentucky, to Susie and... View Obituary & Service Information

The family of Ronald Gene Mattingly created this Life Tributes page to make it easy to share your memories.

Send flowers to the Mattingly family.