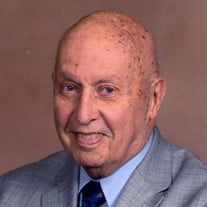 Ronald J. “Ron” Smith, 83, of Hanover, passed away peacefully on Sunday, September 29, 2019 at York Hospital. Born March 30, 1936 in Hanover, he was the son of the late John A. and Rita (Mattingly) Smith. He was also preceded in death by his wife of 55 years, Camilla Rose (Roth) Smith, who died on Christmas Day 2011; a daughter, Joanne E. Smith; a grandson, Joseph A. Startzel; and a brother, Gerald Smith. Ron attended Delone Catholic High School where he met his wife Camilla and worked as a painter and wallpaper hanger his entire life. An entrepreneur, he started his own painting and wallpaper hanging business in 1975 and acquired his father's paint and wallpaper store on Pleasant Street in 1976 which he operated together with his wife for 20 years. In addition to his devotion to his family, he was a faithful servant and member of St. Joseph Catholic Church in Hanover, where he was a member of the Holy Name Society, Extraordinary Minister of the Eucharist, lector, co-chair of the 150th Anniversary Committee, past chairperson of the parish council, past president of the St. Joseph Home and School Association and a member or co-chair of several building committees including the existing church, parish center, school, and administrative building. Ron joined the Hanover Chapter of the Knights of Columbus in 1955 and became a charter member of the Fr. Cyril J. Allwein Assembly of the Fourth Degree in 1959. He served as Master of the Fourth Degree from 1974 to 1978 and was a life member. He was named as Holy Name Man of the Year for the Conewago Deanery and Man of the Year for the Hanover Knights of Columbus. Ron enjoyed woodworking, golfing, attending daily Mass and spending time with his family and friends. Survivors include children, Jeffrey F. Smith and his wife, Karen, of New Cumberland, Lisa R. Startzel and her husband, James, of Hanover, Jill E. Carbaugh and her husband, Robert, of Chesapeake, VA, and Amy L. Warner and her husband, Jeffrey, of Hanover; seven grandchildren, Katie Wolfgang, Jamie Smith, SFC Kurtis Startzel, Elliott Carbaugh, Trevor Smith, Davis Carbaugh and Victoria Warner; two great grandchildren, Corbyn and Layna Wolfgang; two sisters, Dianne E. Eisenhauer of Annville and Julia Klunk of Hanover; three brothers, Carl Smith of York, Michael Smith of Hanover and Jason Smith of New Oxford. A Mass of Christian Burial to celebrate Ron's life will be held at 9 a.m. Saturday, October 5 at St. Joseph Catholic Church, 5125 Grandview Road, Hanover with The Rev. Msgr. James M. Lyons officiating and The Rev. Joseph F. Gotwalt and The Rev. Lawrence McNeil concelebrating. Burial will be in St. Joseph Cemetery. Friends and family will be received at St. Joseph Catholic Church from 6-8 p.m. Friday, October 4 followed by the recitation of the Rosary at 8 p.m. by Rev. Mr. Tom Aumen. Memorial contributions may be made in memory of Ron to St. Joseph Catholic Church, 5055 Grandview Rd., Hanover, PA 17331.

The family of Ron J. Smith created this Life Tributes page to make it easy to share your memories.

Send flowers to the Smith family.