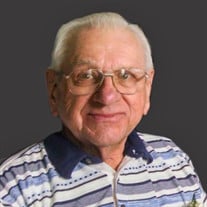 Richard E. Wolf, 89, of Hanover, beloved husband of Gladys Feeser Wolf, entered into God’s eternal care on Monday, October 11, 2021 at his home with his family by his side. Born on Friday, January 29, 1932 in Hanover, he was the son of the late Sylvester and Ella Ebaugh Wolf. He is also preceded in death by a son, Frederick E. Wolf; a son-in-law, Travce Wagner; six sisters, Mary Zarillo, Dorothy Crabs, Evelyn Reaver, Helen Riley, Ethel Lawrence, and Margarette Schuhart; six brothers, Robert, Burnell, Raymond, Donald, James, and Wilber Wolf. A graduate of Delone Catholic High School in McSherrystown, Richard proudly serviced in the United States Air Force during the Korean War and worked for United Telephone and Wimpy Quarry for many years. Involved in the community, he was a member of St. Joseph Catholic Church, the Knights of Columbus McSherrystown Council #2551, the McSherrystown Moose Lodge #720, the Home Association of McSherrystown, and the Hanover American Legion Post #14. He was a life member of the Home Association Hanover Amvets Post 22 and enjoyed bowling, watching the Baltimore Ravens and the Orioles, and dining at Dutch Country Restaurant and McDonald’s. In addition to his wife of 65 years, survivors include nine children, Elaine Smith, Joe Wolf and his companion, the late Cindy Swope, Theresa Glass and her husband, Dave, Stanley Wolf and his wife, Deb, Jason Wolf and his wife, Angie, Sandy Berkheimer, and her husband, Donnie, Doug Wolf and his wife, Kim, Brian Wolf and his companion, Heidi Arndt, and Diane Wagner and her companion, Jason Stonesifer, all of Hanover; many grandchildren and great-grandchildren; and a sister, Jean Duttera. A Mass of Christian burial will be held at 11AM on Thursday, October 14, 2021 at St. Joseph Catholic Church, 5055 Grandview Road, Hanover, with The Rev. Samuel Miller celebrating. The family will receive friends one hour prior to the service and at a viewing to be held from 6-8:00PM on Wednesday, October 13, 2021 at Panebaker Funeral Home & Cremation Care Center, Inc., 311 Broadway, Hanover. A prayer service will follow at 8:00PM. Memorial contributions may be made to St. Jude Children’s Research Hospital, 501 St. Jude Place, Memphis, TN 38105.

Richard E. Wolf, 89, of Hanover, beloved husband of Gladys Feeser Wolf, entered into God&#8217;s eternal care on Monday, October 11, 2021 at his home with his family by his side. Born on Friday, January 29, 1932 in Hanover, he was the son of... View Obituary & Service Information

The family of Richard E. Wolf created this Life Tributes page to make it easy to share your memories.

Send flowers to the Wolf family.