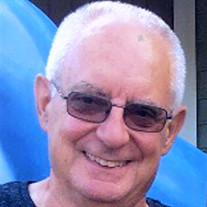 Richard E. McLane, 72, of Hanover, loving husband of Kathy D. McLane, entered into God’s eternal care on Saturday, December 29, 2018 at his home surrounded by his family. Born on Sunday, October 13, 1946 in Hanover, he was the son of the late Revere D. and Florence Runk McLane. Richard was a 1964 graduate of Eichelberger High School and served with the US Army. He owned and operated The Tavern on Center Square in Hanover from 1973 to 1978. In 2008, he retired from Snyder’s of Hanover after 17 years of service and was later employed as a security guard at Hanover Hospital from 2008 to 2014. He served 10 years on the Hanover Public School District Board of Directors and had been a member of the McSherrystown Home Association since 1994. In addition to his wife of 44 years, he is survived by a daughter, Bryn Feeser and her husband, Jesse, of Hanover; a son, Adam McLane and his wife, Heather, of Westminster, MD; and five grandchildren, Laykin, McKenna and Morgan Feeser, and Max and Griffin McLane. A memorial service will be held at 6 PM Sunday, January 6, 2019 at the Harvest Chapel, 6947 York Road, Abbottstown, PA 17301. In lieu of flowers, memorial contributions may be made to St. Jude Children’s Research Hospital, 501 St. Jude Place, Memphis, TN 38105 or to VNA Hospice of Hanover and Spring Grove, 440 N. Madison Street, Hanover, PA 17331.

Richard E. McLane, 72, of Hanover, loving husband of Kathy D. McLane, entered into God&#8217;s eternal care on Saturday, December 29, 2018 at his home surrounded by his family. Born on Sunday, October 13, 1946 in Hanover, he was the son of... View Obituary & Service Information

The family of Richard E. McLane created this Life Tributes page to make it easy to share your memories.

Send flowers to the McLane family.