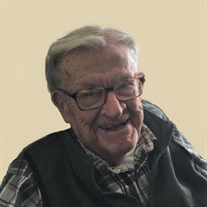 Richard H. Johnson, 98, of Hanover, passed away peacefully on Sunday, January 3, 2021 at UPMC Hanover Hospital. Born on Sunday, March 26, 1922 in Dekalb, IL, he was a son of the late Nels and Clara Sophia Johansson Johnson. Mr. Johnson retired from the Baltimore Sun after many years of service. He later moved to Hanover and purchased a farmette and thoroughly enjoyed being a “gentleman farmer”, tending to the animals and produce. He adored his grandchildren and enjoyed building gourds, birdhouses and completing 1000+ piece puzzles. Survivors include a son, Richard A. “Allan” Johnson and his wife, Susan; a daughter, Nancy L. Jacobson and her husband, Bruce; five grandchildren, Eric, Michael, Moria, Kate and Aaron; six great-grandchildren, Natalie, Colin, Sophia, Gabriel, Aidan and Jude; one great-great-granddaughter, Isla; and several nieces and nephews. In addition to his parents, he was preceded in death by a daughter, Sue Allane Baker; a brother, Dennis Johnson; a niece, Sharon Johnson; and a nephew, Neal Johnson. A memorial service will be held at a later date. In lieu of flowers, memorial contributions may be made to the York County SPCA, 3159 N. Susquehanna Trail, York, PA 17406 or to the Adams County SPCA, 11 Goldenville Road, Gettysburg, PA 17325.

The family of Richard H. Johnson created this Life Tributes page to make it easy to share your memories.

Richard H. Johnson, 98, of Hanover, passed away peacefully on...

Send flowers to the Johnson family.