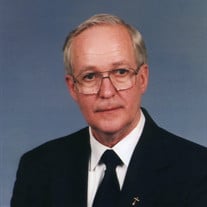 Raymond J. Smith, 85, of Hanover, PA, passed away on January 11, 2022 at UPMC Hanover after a long, hard-fought battle with various cancers. Ray was born in Hanover, PA to Mary Regina (Lawrence) Smith and Richard F. Smith. He attended Delone Catholic High School and graduated in 1954. After serving as a company clerk in the Army for two years, he attended night school at the Baltimore College of Commerce, where he received his Associates Degree in Accounting. Ray was initially employed at Black & Decker, where he met the love of his life, Shirley Bosley. He later worked at Hanover Direct as a Financial Analyst for thirty-seven years. Ray was a man of deep Catholic faith and was ordained a Permanent Deacon in the Harrisburg Diocese on June 10, 1978. He served for over twenty-five years at Immaculate Heart of Mary parish in Abbottstown, PA. He was a member of St. Vincent dePaul parish and an honorary member of the Knights of Columbus. To all who knew him, Ray’s faith in God was a true inspiration. Ray is survived by his wife of fifty-eight years, Shirley (Bosley) Smith; his sons, Michael (Nancy Dickson), Matthew (Patti Shultz), Jeremy (Brenda Miller); his daughter Erin Putt (Chris); his eleven grandchildren, Andrew, Amanda, Kevin and Caroline Smith, Heather Aleshire and Cory Smith, Madelyn, Adam and Emma Smith, Eloise and Evan Putt; four great-granddaughters; and his sister Kathleen Neiderer of Hanover, PA. He was the youngest of eight children, and was preceded in death by siblings Robert, Richard, Harold, Donald, Vivian and Constance, as well as twin granddaughters, Hayley and Hannah Smith. Ray was passionate about his love for God, his family and sports, especially Notre Dame football. He enjoyed music, whether playing piano, singing in the Army choral group during his deployment in Germany or just listening to music at home. He had a fondness for dogs, and was known to spoil them at the dinner table. Ray was loved and respected by all who knew him, and was known for his positive outlook and sense of humor. A viewing will be held on Friday, January 14, 2022 from 6 to 8:00 PM at Panebaker Funeral Home in Hanover, PA. A Mass of Christian Burial will be held at St. Vincent dePaul Catholic Church on Saturday, January 15, 2022 at 1:00 PM. In lieu of flowers, contributions may be made in his memory to St. Jude Children’s Research Hospital, 501 St. Jude Place, Memphis, TN 38105.

The family of Raymond J. Smith created this Life Tributes page to make it easy to share your memories.

Send flowers to the Smith family.