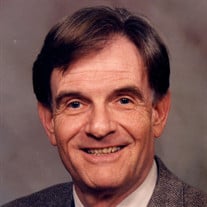 Phillip W. Heilman, 78, of Hanover, loving husband of Monica Kellenberger Heilman, entered into God’s eternal care on Friday, November 30, 2018 at UPMC Pinnacle Hanover. Born on Sunday, December 10, 1939 in Hanover, he was a son of the late Lester and Maggie Vaughn Heilman. A 1957 graduate of Eichelberger High School, he received his Bachelor’s Degree in 1964 and Master’s Degree from Shippensburg University in 1969. Phillip was the Business Administrator for the South Western School District for more than 38 years, retiring in 2002. During that time, he was the initial business administrator for the newly formed merger of Manheim, Penn and West Manheim schools into South Western. In 1985, he was presented the Gary Reeser Award for the outstanding school business official determined by the PA Association of School Business Officials (PASBO). He served on the Board of Directors of PASBO (1986-1989), was an officer of the Lincoln Intermediate Joint Purchasing Board for 25 years, and served on the Board of the PA Insurance Consortium for PA schools for ten years. In addition, he served on the York County School of Technology Authority Board (2006-2017), the Shippensburg University Athletic Board (2006-2017), and on the 50th year Reunion Committee for Shippensburg University in 2014. Phillip was a former President of the Class of 1957 of Eichelberger High School for 25 years and was President of the Hanover High School Alumni Association for the 50th anniversary reunion in coordination with the 2007 graduating class of Hanover High School. He also served on the Penn Township Board of Commissioners for 12 years (2006-2017). He was a member of St. Paul’s Lutheran Church on York Street, the Association of School Business Officials International, the PA Association of School Business Officials and the Hanover Republican Club. He was a life member of Hanover Elks BPOE Lodge # 763 and the Hanover Home Association. Surviving, in addition to his wife of 47 years, is a daughter, Debra Heilman Giraffa and her husband, Jason; a son, Christopher W. Heilman and his wife, Sara, all of Hanover; three grandchildren, Trent and Taylor Giraffa, and Sadie Heilman; and several nieces, nephews and cousins. In addition to his parents, he was preceded in death by a brother, James Heilman, and a sister, Judy Rodenberg. The funeral will be held 11 AM Wednesday, December 5, 2018 at Panebaker Funeral Home, 311 Broadway, Hanover with The Rev. E. Robert Burkhart officiating. Burial will follow in St. Joseph Cemetery. The family will receive friends at a viewing to be held at the funeral home from 6 to 8 PM Tuesday and one hour prior to the service. In lieu of flowers, memorial contributions may be made to the Shippensburg University Heilman World Cup, 1871 Old Main Drive, Shippensburg, PA 17257 or to St. Paul’s Lutheran Church, 127 York Street, Hanover, PA 17331.

Phillip W. Heilman, 78, of Hanover, loving husband of Monica Kellenberger Heilman, entered into God&#8217;s eternal care on Friday, November 30, 2018 at UPMC Pinnacle Hanover. Born on Sunday, December 10, 1939 in Hanover, he was a son of the... View Obituary & Service Information

The family of Phillip W. Heilman created this Life Tributes page to make it easy to share your memories.

Send flowers to the Heilman family.