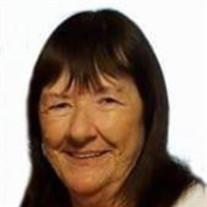 Peggy Beard, 70, of Hanover, beloved wife of Eric Beard, entered into God’s eternal care on Tuesday, July 14, 2020 at UPMC Pinnacle Hanover. Born on Tuesday, October 18, 1949 in Hanover, she was a daughter of the late Richard W. Wagaman, Sr. and Dorothy I. Cease. She was also preceded in death by a brother, Robert E. Wagaman, who died in 2007; and a granddaughter, Taylor Rose Hahn, who died in 2018. A graduate of New Oxford High School, Peggy worked as a waitress at Marshall’s Diner for ten years and as certified nurse’s assistant for more than 40 years. She was a member of St. Mark’s Lutheran Church and enjoyed flea markets, tending her flowers, fishing, and spending time with her family; especially her children and grandchildren. In addition to her husband of 29 years, survivors include two children, Lori Honeycutt and her husband, John, of East Berlin; and Randy Wagaman and his wife, Vicki, of Hanover; a step-daughter, Tabitha Beard; five grandchildren, Hannah Hahn and her significant other, Tucker, Zachary Wagaman and his significant other, Sophia, Krystal Wagaman and her significant other, Jordan, Macee Wagaman, and Megan Wagaman and her significant other, Jordan; two great-grandchildren, Eleanor Rose Wagaman and Rhett Allen Staub; four sisters, Robin Barton of Spring Grove, Susan Baublitz and her husband, Rick, of Abbottstown, Lynda Hustler and her husband, Steve, of McSherrystown, and Holly Biggins of Cashtown; and a brother, Richie Wagaman and his wife, Joyce of Tennessee. The funeral will be held at 11 AM on Monday, July 20, 2020 at Panebaker Funeral Home, 311 Broadway, Hanover with The Rev. Kevin Orewiler officiating. The family will receive friends at a viewing to be held one hour prior to the service. Burial will follow in Rest Haven Cemetery. In compliance with heath and public safety directives, those attending the service will be required to wear masks and attendance inside the funeral home will be limited to 25 people at a time. In lieu of flowers, memorial contributions may be made to Pink Out, Inc., 1150 Carlisle Street, Suite 10, Box 189, Hanover, PA 17331.

The family of Peggy Beard created this Life Tributes page to make it easy to share your memories.

Send flowers to the Beard family.