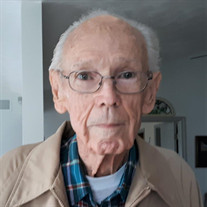 Paul Anthony Sanders, 87, of McSherrystown, entered into God’s eternal care on Saturday, August 28, 2021 at UPMC Hanover Hospital following a period of declining health. Born on Friday, December 22, 1933 in Emmitsburg, MD, he was the last surviving child of the late Robert Henry and Blanche Cecilia Sprankle Sanders. He was also preceded in death by his wife of 52 years, Dorothy LaRue Shelton Sanders who died in 2019; his five brothers, John, Raymond, George, Marshall and Thomas Sanders; and his three sisters, Rita Wiley, Anna Waysack and Mary Bowne. He was a veteran of the United States Air Force and a member of St. Joseph the Worker Parish. Paul is survived by a son, Lawrence Trimmer of Croyden; two grandsons; four great-grandchildren; and several nieces and nephews. The Mass of Christian Burial will be held at 2:00 PM on Tuesday, August 31, 2021 at St. Joseph the Worker Catholic Church, Bonneauville, with The Rev. Benny Jose serving as celebrant. Burial will follow in the Parish Cemetery. The family will receive friends one hour prior to the service at the church. Memorial contributions may be made to St. Joseph the Worker Catholic Church, 12 East Hanover Street, Gettysburg, PA 17325.

The family of Paul Anthony Sanders created this Life Tributes page to make it easy to share your memories.

Send flowers to the Sanders family.