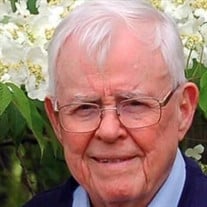 Paul Beavin, Jr., 97, of Westminster, MD and formerly of Hanover and Kosmosdale, KY, entered into God’s eternal care on Wednesday, January 13, 2021 at his home. Born on Monday, October 22, 1923 in Louisville, KY, he was a son of the late Paul Beavin, Sr. and Eva Burnett Beavin. Paul received his Bachelor’s degree in Chemistry from the University of Louisville and was later employed as a chemist by the Food and Drug Administration for 33 years, retiring in 1985. He proudly served his country in the US Marine Corps during World War II in the Pacific Theater. He was a member of St. John Roman Catholic Church in Westminster. Paul enjoyed listening to classical music and working around his home and in his yard. Survivors include his wife of 62 years, Bernice Pressley Beavin; three sons, Phil Beavin and his wife, Crystal, of Lewisville, TX, Jeff Beavin and his wife, Linda, of Finksburg, MD and Tom Beavin and his wife, Kelli, of Thurmont, MD; 12 grandchildren and one great-grandson, who knew him affectionately as "pop pop". He was preceded in death by a brother, Celestine Beavin. A Mass of Christian Burial will celebrated at 11 AM Monday, January 18, 2021 at St. Joseph Catholic Church in Hanover. Burial will follow at Mount Olivet Cemetery. The family will receive friends at a viewing to be held from 3 to 5 PM Sunday at Panebaker Funeral Home & Cremation Care Center, Inc., 311 Broadway, Hanover. In compliance with health and public safety directives, those attending will be required to wear masks and be socially distanced. In lieu of flowers, memorial contributions may be made to St. Joseph Catholic Church, 5055 Grandview Road, Hanover, PA 17331.

The family of Paul Beavin Jr. created this Life Tributes page to make it easy to share your memories.

Paul Beavin, Jr., 97, of Westminster, MD and formerly of Hanover...

Send flowers to the Beavin family.