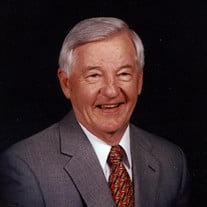 Nevin E. Shultz, 93, of Hanover, beloved husband of Nancy A. (Rinker) Shultz, passed away peacefully on Friday, November 6, 2020 at UPMC Pinnacle Hanover with his family by his side. Born on Wednesday, February 9, 1927 in Hanover, he was a son of the late Harry E. and Mary V. (Runk) Shultz. He is also preceded in death by three brothers, Sterling, Donald, and Robert Shultz; two sisters, Betty Wildasin and Marion Furr; and a grandson, Andrew Shelly, who died on November 5, 2001. In addition to his wife of 69 years, survivors include two daughters, Susan Jane Sassaman and her husband, Gregory, of Winfield and Rebecca Ann Shelly and her husband, Robert, of Wellsville; three grandsons, Mark E. Sassaman and his wife, Jenni, of Pittsburgh, Ryan D. Sassaman and his wife, Sarah, of Carlisle, and Robert A. Shelly, Jr. of Towson, MD; and five great-grandchildren, Luke, Emily, Claire, Hudson and Neva. A 1945 graduate of Eichelberger High School, Nevin continued his education at the Thompson Business College where he majored in Business Administration. During his schooling, he was active in the Pi Rho Zeta Fraternity and was a member of the National Society of Public Accountants. Known as “Nev”, he devoted most of his adult life to volunteer service which included over 30 years with the Borough of Hanover and overall more than 60 years of volunteer service to Hanover and York County. In July of 2016, he was given a framed Proclamation for his services by the Mayor and Council. An avid golfer, he looked forward to coordinating and playing in the senior programs at the South Hills Golf Club, where he was a member and coordinator. Reading and time at the computer were enjoyable pastimes. Working in the yard was an opportunity for fresh air, sunshine and exercise, even at the advanced age of 89. He authored his family’s genealogy and anxiously looked forward to Sudoku puzzles. Family was extremely important to him having a special bond with his grandsons and great- grandchildren. Originally a part of management staff at Veit Furniture Corporation, he later became President and co-owner of Hanover Craftsmen, Inc., with his wife, Nancy. A proud veteran, he served his country in the Civil Air Patrol, United States Army Air Corps Enlisted Reserve during World War II, and the Pennsylvania National Guard. As longtime members of Trinity United Church of Christ in Hanover, he and Nancy were married in October of 1951 by the Rev. Dr. Howard E. Sheely. Nevin had been a scout with Trinity Scout Troop No. 104 and continued his services to the church as the church’s first lay President of the Consistory, a Deacon, an Elder, a Liturgist, General Superintendent of the Sunday Church School class, President of the Men’s Brotherhood organization, a Trinity Church Representative to the Gettysburg Association, a board member of the United Church of Christ Penn Central Conference in Harrisburg, and delivered the Trinity Church tapes for more than 20 years. Active locally, he served as treasurer, president and board member of the Hanover Community Recreation Association, treasurer for the Borough of Hanover, president and board member of the Jaycees and the Exchange Club, participated in the Community Meals on Wheels program and was a life member of the American Legion Hanover Post #14, including the Drums and Bugle Corps. Immensely interested in local education, he served as President of the Clearview Elementary School PTA, board member and president of the Hanover Public Schools and Lincoln Intermediate Unit #12, board member and regional director of the Pennsylvania School Board Association in Harrisburg, board member of the Vocational-Technical School of York County, board member of the Hanover Public Schools Building Authority, president of the Hanover High School Music Parent’s Club, a moderator for a public meeting of the Hanover Schools, and a reader to children in elementary school. He was a member and chairman of the Hanover Chapter of the American Red Cross, co-chairman of the United Way Industrial Division, board member and chairman of the Hanover branch of the American Cancer Society, board member of the York County American Cancer Society, and he served as the Majority Voting Inspector for the 2nd Ward. He was a member of the Hanover Republican Club, AARP Chapter #2812, Elks Lodge #763, a volunteer with the Eichelberger Performing Arts Center, Arcadian Social Club, a Master Apprise Counselor with the York County Area Agency on Aging, a board member and commissioner with the York County Planning Commission, chairman of the Hanover Zoning Hearing Board, member of the Hanover Town Council, chairman of the Hanover Planning Commission, and served as Block Captain of the Clearview Neighborhood Watch Organization. The family will receive friends at a visitation from 10am to 11am on Saturday, November 14, 2020 at Panebaker Funeral Home & Cremation Care Center, Inc., 311 Broadway, Hanover. Services and burial will for be for family members. In compliance with health and public safety directives, those attending the visitation will be required to wear masks, be socially distanced and attendance inside the funeral home will be limited. In lieu of flowers, memorial contributions may be made to Trinity United Church of Christ, 116 York Street, Hanover, PA 17331 or the Homewood Foundation's Benevolent Care Fund, 425 Westminster Avenue, Hanover, PA 17331.

Nevin E. Shultz, 93, of Hanover, beloved husband of Nancy A. (Rinker) Shultz, passed away peacefully on Friday, November 6, 2020 at UPMC Pinnacle Hanover with his family by his side. Born on Wednesday, February 9, 1927 in Hanover, he was a... View Obituary & Service Information

The family of Nevin E. "Nev" Shultz created this Life Tributes page to make it easy to share your memories.

Send flowers to the Shultz family.