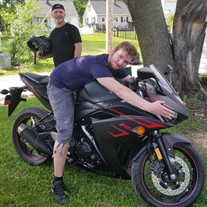 Mike “Mikie” Sumner, Jr., 18, of Hanover, died Wednesday, June 12, 2019 from injuries sustained in a motorcycle accident. Born on Friday, June 16, 2000 in Hanover, he was the only son of Michael D. and Karen L. Sumner. He was baptized in the Catholic faith. A 2018 graduate of New Oxford High School, he was a student at Full Sail University, majoring in Video and Cinematography. He started with his love of computers, programming and gaming at the age of 5, when he began playing Xbox. At the age of 12, he hacked into Xbox and became the #1 gamer in the world and was then banned from Xbox under his username. He built computers and taught himself much of his programming knowledge. In 2017, he made a video for Ryder Logistics, which was entered into the Kaizen Championship and won first place. In addition to his love of computers, he enjoyed riding his motorcycle and could often be found in State Parks filming his rides and taking photos for his video uploads. He had many followers on his YouTube channel, Dasali3n. In addition to his parents, he is survived by his four sisters, Amanda Sumner Topper and her husband, John of McSherrystown, Kristy Sumner Neyra and her husband, Rob of Littlestown, Amy Sumner and her husband, Elgin Fremlin of Spokane, WA and Brittany Sumner of Annville; three nephews, Hunter and Harley Topper and Rowen Neyra; a paternal grandmother, Elizabeth Sumner and a paternal grandfather, Paul Sumner, both of Hanover and his girlfriend, Suriya Ahmer of Terra Haute, IN. The family will receive friends at a viewing from 3 to 5 pm and 6 to 8 pm on Saturday, June 15, 2019 at Panebaker Funeral Home, 311 Broadway, Hanover. In addition to other memorials, friends may contribute to an account to assist in Mike's final expenses: https://www.tmcfunding.com/search-memorials/campaign/3511?layout=single

The family of Mike Sumner created this Life Tributes page to make it easy to share your memories.

Send flowers to the Sumner family.