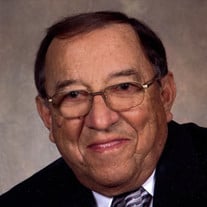 Merle E. Dubbs, 86, of Hanover, loving husband of Arlene Baumgardner Dubbs, entered into God’s eternal care on Tuesday, April 9, 2019 at home surrounded by his family. Born on Friday, September 23, 1932 in Glen Rock, he was the son of the late Lloyd M. and Hattie Rohrbaugh Dubbs. A 1950 graduate of Glen Rock High School, he proudly served our country with the United States Army during the Korean War. In 1994, following 44 years of service, Merle retired from AMP, Inc. and later became a member of AMPRA, their retirement association. He was a faithful member of Trinity United Church of Christ since 1953. He served on the Penn Township Board of Commissioners from 1999 to 2004, the Penn Township Sewer Authority for ten years and was a member of the South Western School Authority for six years. Merle was a Life Member of the Hanover Lions Club, past president of the Penn Township Lions Club and a recipient of a Melvin Jones Fellowship from Lions Club International. He was a member of the Hanover Elks BPOE # 763, sang with the Glen Rock Carolers for 33 years, and enjoyed playing in the golf leagues at South Hills and Hickory Heights. In the 1960’s, he could be seen coaching Hanover Little League Baseball. Surviving, in addition to his wife of nearly 67 years, are two daughters, Pamela Kress and her husband, Terry, and Christine Frederick and her husband, Lance, all of Hanover; two grandsons, Benjamin Kress and Tyler Frederick; a great-grandson, Matthew Kress; and a sister, Doris Grove of Glen Rock. Following cremation, a memorial service will be held at 10 AM Monday, April 15, 2019 at Panebaker Funeral Home & Cremation Care Center, 311 Broadway, Hanover with The Rev. Peg Grzelkowski officiating. Burial will be held privately at Rest Haven Cemetery with military graveside rites being rendered by Hanover Allied Veterans Honor Guard. Memorial contributions may be made to the Hanover Lions Club, 52 Knisley Drive, Hanover, PA 17331.

Merle E. Dubbs, 86, of Hanover, loving husband of Arlene Baumgardner Dubbs, entered into God&#8217;s eternal care on Tuesday, April 9, 2019 at home surrounded by his family. Born on Friday, September 23, 1932 in Glen Rock, he was the son of... View Obituary & Service Information

The family of Merle E. Dubbs created this Life Tributes page to make it easy to share your memories.

Send flowers to the Dubbs family.