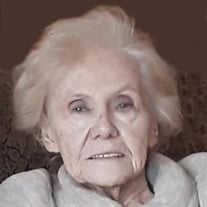 Marian M. Henry, 85, of Hanover, died Thursday, March 14, 2019 at her daughter’s home in East Berlin. Born on Thursday, July 29, 1933 in Curtis Bay, MD, she was a daughter of the late Alexander W. and Jennie C. Woczniecz Szymanski and wife of 56 years to the late Richard “Dick” Henry, who died in 2010. She was also preceded in death by a son, Ralph E. Henry, Sr.; eight brothers and six sisters. Marian was an employee of Random House for 10 years, a member of the Hanover Loyal Order of the Moose Lodge 227, and a member of St. David’s United Church of Christ. She loved to dance and rollerskate with her husband and enjoyed flowers. Survivors include her daughter, Sandra Kuhn and her husband, David of East Berlin; a son, Richard Henry, Jr. and his wife, Cindy of Thomasville; a daughter-in-law, Dorothy L. Henry Bauer of Flippen, AR; six grandchildren; nine great-grandchildren; and many nieces and nephews. The funeral will be held at 2 PM Monday, March 18, 2019 at St. David’s United Church of Christ Church with The Rev. Scott Sager officiating. Burial will follow in St. David’s Cemetery. The family will receive friends at the church one hour prior to the service. Memorial contributions may be made to St. David’s United Church of Christ Church, 142 Hobart Road, Hanover, PA 17331 or to the American Cancer Society, 1004 N. Juniata Street, Hollidaysburg, PA 16648.

The family of Marian M. Henry created this Life Tributes page to make it easy to share your memories.

Send flowers to the Henry family.