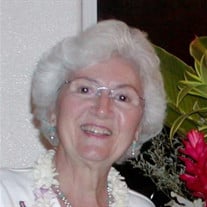 Lucille Velma Chapman, 84, of Hanover, passed away on Monday, April 15, 2019, following complications from a stroke. Lucille was raised in Adams County, as the second of nine children. She graduated from Biglerville High School in 1952 where she played basketball, softball, and track and sang in various clubs and performances. After graduation she moved to Gettysburg to work for the phone company. She met her husband, Clifford E. Chapman, in Gettysburg when he was on leave visiting his parents. Prior to his death in 2013, Lucille and Cliff were married for 58 wonderful years during which time they lived in Maryland, Virginia, Japan, Cuba and Pennsylvania. Growing up on her family’s farm and being the oldest daughter, she helped raise her younger siblings and was well prepared for raising her family around the world. Lucille was a Navy wife for the first twenty years of her marriage raising five children and handling the family’s affairs when Cliff was deployed. She started her mid-life career in retail and wholesale optics at times working with her husband, son Joseph and daughter Debra. She enjoyed taking care of her family, entertaining, travel and activities with her friends at Homewood. She was an immaculate housekeeper, enjoyed decorating, working in her flower garden and taking walks on the beach. Lucille is survived by her children, Debra Rowland of Towson, MD; Joseph Chapman of Hampstead, MD; Clifford and Evangeline Chapman II, of Virginia Beach, VA; Laura Chapman and Scott Breshears of Allyn, WA; and Daniel and Stephanie Chapman of Wailuku, Maui, HI; her grandchildren, Amanda Short, Stewart Rowland, Karissa Chapman and Jaydon Chapman and her siblings, Patricia Weaver, Elaine Ness, John Weaver, Harold Weaver, William Weaver and Richard Weaver. Lucille is preceded in death by her parents, George and Edna Weaver; her son-in-law, Steve Rowland, her mother-in-law Thelma M. Moore; her brothers, Robert Weaver and George Weaver, II and her nephews, George Weaver, III and Steven Losser. A memorial service will be held at 12:30 pm on May 11, 2019 at Homewood Chapel at Plum Creek with The Rev. Elza M. Hurst officiating. The family will receive friends one hour prior to the service. Inurnment will be held at the National Memorial Cemetery of the Pacific. In lieu of flowers, memorial donations may be given to the benevolent fund at Homewood at Plum Creek, 425 Westminster Avenue, Hanover, PA 17331.

Lucille Velma Chapman, 84, of Hanover, passed away on Monday, April 15, 2019, following complications from a stroke. Lucille was raised in Adams County, as the second of nine children. She graduated from Biglerville High School in 1952 where... View Obituary & Service Information

The family of Lucille V. Chapman created this Life Tributes page to make it easy to share your memories.

Lucille Velma Chapman, 84, of Hanover, passed away on Monday,...

Send flowers to the Chapman family.