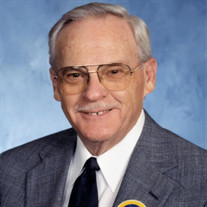 Lloyd Donald Yingling, 96, of Hanover, entered into God’s eternal care on Tuesday, August 18, 2020 at Hanover Hall Nursing Center. Born on Saturday, July 19, 1924 in Hanover, he was a son of the late George Preston Yingling and Alice R. Baublitz Yingling. He was also preceded in death by his wife of 52 years, Vivian Marion Laughman Yingling, who died in 1995; and five siblings, Maurice L. Yingling, Harlon H. Yingling, Anna L. Bolgania, Mildred Emig and Kenneth P. Yingling. Lloyd proudly served his country during World War II in the US Army Air Corps. He was based in Kansas and trained as a Waist Gunner on B-17’s. He later trained on B-29’s as a Ground Crewman and flew on 15 of their 16 missions out of Guam on bombing raids over Tokyo, serving with the 315th Bomb Wing. After returning home, he was employed by the former York Division of Borg Warner for 42 years and retired in 1984 from the same company, known at that time as York International. He was a life member of the Harold H. Bair American Legion Post #14 with 55 years of continuous membership. Survivors include his son Donald G. Yingling and his wife, Evelyn, of Dallastown; a grandson, Gregory L. Yingling; and a former daughter-in-law, Patricia Womble, both of York. A graveside service will be held at 11:30 AM Saturday, August 22, 2020 at Mount Olivet Cemetery, 725 Baltimore Street, Hanover with The Rev. Kirk A. Griffin officiating. The family will receive friends at a viewing to be held from 10 to 11 AM Saturday at the funeral home. In compliance with health and public safety directives, those attending the viewing and funeral will be required to wear masks and attendance will be limited to 25 persons. In lieu of flowers, memorial contributions may be made to the Commemorative Air Force, Dallas Executive Airport, PO Box 764769, Dallas, TX 75376.

Lloyd Donald Yingling, 96, of Hanover, entered into God&#8217;s eternal care on Tuesday, August 18, 2020 at Hanover Hall Nursing Center. Born on Saturday, July 19, 1924 in Hanover, he was a son of the late George Preston Yingling and Alice... View Obituary & Service Information

The family of Lloyd D. Yingling created this Life Tributes page to make it easy to share your memories.

Send flowers to the Yingling family.