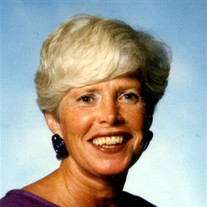 Lisa A. Mish, 80, of Hanover, loving wife of Joseph D. Mish, Jr. died peacefully on Thursday, September 27, 2018 at Homewood at Plum Creek following a period of declining health. Born on Saturday, September 10, 1938 in Hagerstown, MD, she was a daughter of the late Robert R. and Lillian E. Dorsey Wolf.  She was a 1956 graduate of Mt. Airy High School in Maryland and was employed by Springfield State Hospital for over 30 years, retiring in 2001.  She was a member of Ascension Episcopal Church in Westminster, MD but since moving to Hanover, had attended Bethel Assembly of God.  Gifted with a green thumb, she enjoyed planting flowers and tending to her small vegetable garden.  She had an artistic eye and loved to decorate for the seasons.  Lisa had a smile that lit up a room and she made friends easily. In addition to her husband of 40 years, she is survived by her three children, Barry R. Bruce and his wife, Shawna of Eldersburg, MD, Debra K. Chapman and her husband, Larry of Mt. Airy, MD and Bradford L. Bruce of Hanover; 11 grandchildren; five great-grandchildren; two sisters, her twin, Loretta Day and her husband, William of Baltimore, MD and Roberta Wolf, of Maine.  She was preceded in death by a grandson, John Bruce. Following cremation, a memorial service will be held at 11 am on October 20, 2018 at the Church of the Ascension with The Rev. Samuel Nsengiyumva officiating. Burial will be held privately in St. Paul’s United Church of Christ Cemetery in Clear Spring, MD. Memorial contributions may be made in her memory to Church of the Ascension,23 North Court Street, Westminster, MD 21157; Bethel Assembly of God,1125 Frederick Pike, Littlestown, PA 17340; The Alzheimer’s Association or to the charity of one’s choice.

The family of Lisa A. Mish created this Life Tributes page to make it easy to share your memories.

Send flowers to the Mish family.