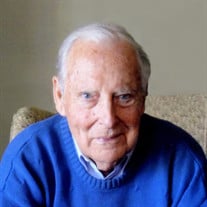 Lewis M. “Lew” Leiter, 100, entered into God’s eternal care on Friday, August 21, 2020 at Homewood at Plum Creek. Born on Thursday, September 18, 1919 in Hagerstown, MD, he was the son of the late Roy A. and Anna Munn Leiter. He was also preceded in death by his wife of nearly 70 years, Enid Hoffer Leiter, who died in 2011. A 1937 graduate of Hagerstown High School, he earned a Bachelor’s degree from Strayer University in Washington, DC in 1940 and later proudly served his country as a Major in the US Army Air Corps during World War II. In 1988, and after 25 years of service, he retired as the general manager of the former Bullock’s Department Store in Pasadena, CA. Lewis was a member of All Saints Episcopal Church, the Hanover Country Club, the Hanover Area Historical Society and the Rotary Club of Hanover. Survivors include a daughter, Lynda Olmsted of Sacramento, CA; two sons, Jeffrey Leiter of Dallas, TX and Lewis Leiter, Jr. of Frederick, MD; four grandchildren; and four great-grandchildren. A private service will be held with burial in the Rose Hill Cemetery in Hagerstown, MD.

The family of Lewis M. Leiter created this Life Tributes page to make it easy to share your memories.

Send flowers to the Leiter family.