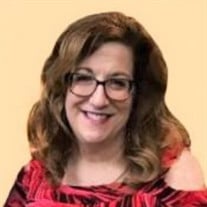 Leigh Anne Foreman McGonigal, 53, of Palmyra and Hanover, entered into God’s eternal kingdom and care on Sunday, March 7, 2021 at Mercy Hospital in Baltimore after a long fight with ovarian cancer. Leigh Anne was born on March 29, 1967, and was the loving daughter of William and Judith Shoemaker Foreman of Hanover. A 1985 graduate of Hanover Senior High School, “Leadles” was active in the marching band, chorus, school musicals and student council. Following high school, she graduated from Cumberland Valley Vo-Tech with a certificate as a dental assistant, and several years later, with the encouragement and help of Dr. Veasy Cullen, graduated from Baltimore City College with a degree in Dental Hygiene. She worked as a dental hygienist for Dr. Fink for several years and for the last 22 years worked for the Hershey Dental Group in Hershey. “Miss Fun”, as many members of her family called her, was always looking for laughs and many times became the originator of the games or pranks to which others were drawn. There was never a person who met Leigh Anne that didn’t become a friend! The past several years, she was a member of the Greater Harrisburg Chorus, a championship Sweet Adeline Chorus, who competed in national competitions in various cities across the United States. She absolutely loved and adored the 70 members of the chorus who came from three different states. In addition to her parents, she is survived by her loving son, Zachary; a sister and brother-in-law, Denise and Bradley Geiman of Hanover; a brother and sister-in-law, Robert and Cindy Foreman of New Hope, PA and one niece and three nephews, Emma and Nate Geiman and Kenny and Charlie Foreman. Following cremation, a graveside service will be held at 1PM Wednesday, March 17, 2021 at Rest Haven Cemetery with The Rev. Dr. Kim Blocher officiating. Due to the COVID-19 pandemic, those attending are encouraged to wear masks and socially distance themselves. A special celebration of Leigh Anne's life will be held at a later date. Leigh Anne was the recipient of several thousand dollars in aid which was raised by her loving classmates and friends when they sponsored a benefit fund raiser for her in March of 2018. Over 200 attendees enjoyed an evening of music, dancing, silent auctions and games of chance for the fight against her cancer. Her family is grateful to all who knew Leigh Anne. In lieu of flowers, donations may be made in her name to Johns Hopkins Oncology Center, Sidney Kimmel Comprehensive Cancer Center, 1650 Orleans Street, Baltimore, MD 21231 or to the Institute for Cancer Care at Mercy, Mercy Medical Center, 227 St. Paul Place, Baltimore, MD 21202.

Leigh Anne Foreman McGonigal, 53, of Palmyra and Hanover, entered into God&#8217;s eternal kingdom and care on Sunday, March 7, 2021 at Mercy Hospital in Baltimore after a long fight with ovarian cancer. Leigh Anne was born on March 29, 1967,... View Obituary & Service Information

The family of Leigh Anne Foreman McGonigal created this Life Tributes page to make it easy to share your memories.

Send flowers to the McGonigal family.