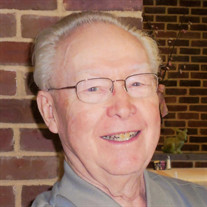 Lauren Newton “Doug” Douglass, Jr., 91, of New Oxford, husband of Adele C. Ordonez Douglass, entered into God’s eternal care on Friday, October 30, 2020 following a period of declining health. Born on Monday, April 29, 1929 in Pittsburgh, he was a son of the late Lauren N. Douglass, Sr. and Jessie F. Young Douglass. A veteran of the United States Air Force, he served his country during the Korean War. Doug spent his career as an air traffic controller, employed by the Federal Aviation Administration for more than 33 years and later with Hughes Aircraft Corporation. In his younger years, he played the saxophone and enjoyed playing in a band. He loved a good joke, playing cards with Adele and entertaining friends. He was a member of the Waynesboro Lions Club and an avid Pittsburgh Steelers and Pirates fan. In addition to his wife of 66 years, he is survived by a son, Keith Douglass of Glenville; a daughter, Karen Fuller of Honolulu, HI; three grandchildren, Skyler and Holland Fuller and Adrian Douglass; a great-grandson, Skylan; and a brother, Edward “Jim” Douglass and his wife, Joan, of Butler. He was preceded in death by a son-in-law, Les Fuller. The funeral will be at 10 am on Saturday, November 7, 2020 at Panebaker Funeral Home & Cremation Care Center, Inc., 311 Broadway, Hanover with Pastor Linda Titzell officiating. Burial will follow in Mount Olivet Cemetery with military honors being rendered by the Hanover Allied Veterans Honor Guard. The family will receive friends one hour prior to the service. In compliance with health and public safety directives, those attending will be required to wear masks, be socially distanced and attendance inside the funeral home will be limited.

The family of Lauren Newton "Doug" Douglass Jr. created this Life Tributes page to make it easy to share your memories.

Send flowers to the Douglass family.