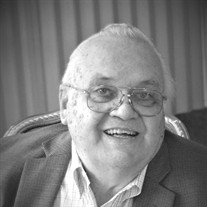 Kenneth “Ken” Paulin, 81, of Hanover, PA, entered into God’s eternal care on Friday, March 22, 2019 at UPMC Pinnacle Harrisburg. Born on Sunday, February 13, 1938 in Boston, MA, he was a son of the late William D. and Dorothy Stall Paulin. He was also preceded in death by his wife of more than 50 years, Judith Henley Paulin, who died in 2012; and a brother, Robert Paulin. Ken received his Master’s degree in Engineering from Northeastern University and was a longtime employee of Polaroid in Waltham, MA. After his retirement, he and Judith relocated to Hanover, PA. While in college, he completed his ROTC training and later served as a Captain with the US Army. He was a member of St. John United Methodist Church in Manchester, MD and had been an active member of the First Congregational Church in Hanover, MA where he was a member of the Merriweds Couples Club. In his younger days, Ken built and raced sailboats and had a lifelong appreciation of cars and trains. Survivors include his companion, Mary Lou Sheppard; three sons, Thomas B. Paulin and his wife, Theresa, of Derry, NH, Martin W. Paulin and his wife, Cheryl, of Hanover, PA and Steven B. Paulin and his wife, Kathleen of Morehead City, NC; eleven grandchildren and seven great-grandchildren. The family will receive friends at a viewing to be held from 6 to 8 PM Tuesday, March 26, 2019 at Panebaker Funeral Home & Cremation Care Center, Inc., 311 Broadway, Hanover. A prayer service will follow at 8 PM. Burial will be held in Hanover, MA.

The family of Kenneth "Ken" Paulin created this Life Tributes page to make it easy to share your memories.

Send flowers to the Paulin family.