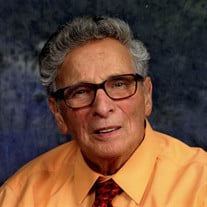 Kenneth E. Hilker, 82, of Hanover, entered into God’s eternal care on Tuesday, January 8, 2019 at Hanover Hall Nursing Center. Born on Tuesday, December 1, 1936 in Hanover, he was a son of the late Walter and Delta Good Hilker. He was also preceded in death by his wife of 51 years, Gloria J. Hilker, who died in 2011. He attended Littlestown High School and earned his GED in June of 1992. Kenneth proudly served his country with the Army National Guard and later retired after 21 years of service with the RH Sheppard Company. He was a member of the Hanover First Church of God, the Super Senior Class at Club 2000, and did volunteer work at the Hanover Community Theatre, Hanover Area Council of Churches, and the Eichelberger Performing Arts Center. In addition, he collected sneakers for Club 2000 to benefit children with Down’s Syndrome. Survivors include his loving companion, Delores Frey; two sons, Douglas E. Hilker and his wife, Nancy, and Randy L. Hilker and his wife, Faye A. Messinger Hilker, all of Hanover; one daughter, Lorie A. Klunk and her husband, Douglas B. Klunk, of Hanover; eight grandchildren, Andrew Hilker and his wife, Vanessa, Brent Hilker, John Hilker and his fiancée, Chasidy Gladfelter, Brittany Hilker and Jennifer Hilker-Scobie and her husband, Tommy, Danielle Klunk, Aimee Klunk Selfridge, and Lindsay Kastner; and twelve great-grandchildren, Ronan, Alexia and Brett Hilker, Brooke Conover, Adalyn, Emmitt, Maddox, Vivian, Harlon and Theron Hilker, and Preston and Cayna; six brothers, Louis Hilker, Raymond Hilker, Dean Hilker, William Hilker, James Hilker and David Hilker; and one sister, Nancy Rohrbaugh. The funeral will be held at 10 AM Saturday, January 12, 2019 at the Hanover First Church of God, 600 Fairview Road, Hanover with Pastors Jerry Shoap and Dan Thomas officiating. Burial will be in Mount Olivet Cemetery. The family will receive friends at viewings to be held at the church from 5 to 8 PM Friday and one hour prior to the service on Saturday. In lieu of flowers, memorial contributions may be made to the St. David’s UCC Medical Supply Closet, 142 Hobart Road, Hanover, PA 17331.

Kenneth E. Hilker, 82, of Hanover, entered into God&#8217;s eternal care on Tuesday, January 8, 2019 at Hanover Hall Nursing Center. Born on Tuesday, December 1, 1936 in Hanover, he was a son of the late Walter and Delta Good Hilker. He was... View Obituary & Service Information

The family of Kenneth E. Hilker created this Life Tributes page to make it easy to share your memories.

Send flowers to the Hilker family.