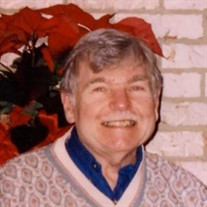 Karl E. Katz, 91, of Hanover, entered into God’s eternal care on Monday, December 21, 2020 at Gettysburg Hospital. Born on Monday, March 11, 1929 in York, he was a son of the late John A. Katz, Sr. and Grace Motter Katz. A 1946 graduate of William Penn High School in York, he received his Bachelor’s degree from the Massachusetts Institute of Technology in 1950. He proudly served his country as a Sergeant in the US Army as an Administrative Engineer with the US Army Guided Missile Development Center at Redstone Arsenal which later became NASA with operations in Huntsville, Alabama. He was a General Manager of the New York Wire Cloth Company in York and was later employed by Dentsply, McClarin Plastics and taught at York Country Day School. Karl was a member of Grace United Church of Christ in York, where he served as a deacon and treasurer. He was an organizing member of the Foreign Trade Bureau in Pennsylvania, and was a member of the Board of Directors of the York Symphony Association. He was also a past president of the local S.A.R. Chapter and the M.I.T. Club of Central Pennsylvania. Survivors include his nieces and nephew, Dracilla Cluck of Oberlin, PA, Lester C. Boeckel of Colorado, Margaret K. McKenrick of Hanover, Linda K. Boyd of Naples, FL, and Susan K. Swierc and Kimberly K. Sweitzer, both of York; and his great-nieces and great-nephews, Brett and Courtney Boeckel, Nathaniel Boyd, Daniel and Dino Einsig, Joseph Herman, David Nease, Jennifer Stetter, Taylor Sweitzer, Rachel Swierc, and Tanner and Jacob Sweitzer. A private service will be held.

The family of Karl E. Katz created this Life Tributes page to make it easy to share your memories.

Send flowers to the Katz family.