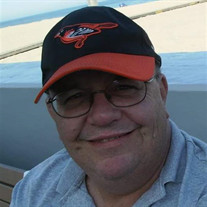 Having accomplished a great deal in his 64 years, Joseph Alan Klunk, Hanover, PA, died peacefully at home surrounded by his wife and daughter on Tuesday, October 8th, 2019 following a two year illness. Born on Sunday, January 16, 1955 in Hanover, he was the son of the late Mary Elizabeth (Feeser) Klunk and John William Klunk, Jr. Joe was a 1973 graduate of Hanover High School working at JOE the Motorist’s Friend. He later studied with Thompson Business Institute. At the age of 18, Joe’s father died suddenly and he was forced to make a difficult choice. To help support his mother, he decided to solely run his father’s business, forgoing acceptance to Shippensburg University as a math/education major. Joe evolved the business and was a successful owner/operator of Conewago Supply Company from which he retired in 2017. He was the husband of his high school sweetheart Kobie Lynn (Gobrecht) Klunk to whom he was married 42 years. Joe gave back to the Hanover community in many ways. He was President of the Hanover Booster Club, and coached Pee Wee baseball, giving every child a chance to play while teaching good sportsmanship. He served with the Hanover Area Jaycees for over 15 years in many capacities namely local President; Regional, District, and State Director; Pennsylvania State Treasurer; JCI Senator; and always helped with the Hanover Halloween parade. He was a member of Penn Township and Hanover Lions Clubs. He was especially proud to have helped renovate the pavilions and repaint the ornamental Lions at the entrance to Young’s Woods. Joe proudly served as a Penn Township commissioner for over 20 years. He was instrumental and proud of the work he accomplished on the Hanover Fire and Rescue Commission. He was a member of Trinity United Church of Christ. Surviving are his wife Kobie Gobrecht Klunk, daughter Kelsey Jo (Klunk) Simmons of Frederick, MD, and her boyfriend Andrew Grimaldi. The family will receive friends Wednesday, October 16th from 6 to 8 pm at Panebaker Funeral Home, 311 Broadway, Hanover, PA. A private graveside service will be held at the convenience of the family. In lieu of flowers, per Joe’s request, memorial donations may be made in his name to Hanover Lions Club, 52 Knisely Drive, Hanover, PA 17331, toward their scholarship fund.

The family of Joseph A. "Joe" Klunk created this Life Tributes page to make it easy to share your memories.

Having accomplished a great deal in his 64 years, Joseph Alan...

Send flowers to the Klunk family.