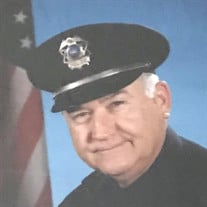 John J. “Jack” Ernst, 75, of Hanover, loving husband of Dottie Berry Ernst, entered into God’s eternal care on Saturday, January 5, 2019 at his home. Born on Wednesday, November 3, 1943 in Hanover, he was a loving son of John A. and Mary L. Essick Ernst. A 1962 graduate of Delone Catholic High School, he was a veteran of the US Army, having proudly served during the Vietnam War. During his first week of Boot Camp training, while stationed at Fort Gordon, GA, he was appointed acting platoon Sergeant of B Company. On completion of his training, he received the “Outstanding Soldier” award and was recommended for Officer’s Training School. Jack was a graduate of the Pennsylvania State Police Academy Municipal Officers Course and served the Hanover community as a law enforcement officer for 30 some years mostly with Penn Township. In addition to his patrol duties, he was the department’s quartermaster and tactical firearms instructor. Upon retirement, he was awarded the Medal of Valor the highest such award that can be bestowed in law enforcement. He was a member and past chairman of the Penn Township Civil Service Commission, a member of the Fraternal Order of Police Lodge # 73 of York County, Penn Township Patrolmen’s Association, Green Springs Rod and Gun Club, McSherrystown Fish and Game and the McSherrystown Home Association, and a life member of the Knights of Columbus in Hanover and McSherrystown. A proud, loving father and grandfather, he always expressed that his most precious treasures in life were his children. Surviving, in addition to his beloved wife of 51 years, are his four children, Shannon Michelle Koontz and her husband, Timothy, of Littlestown, Joseph Matthew Ernst and his wife, Deborah, Mark Andrew Ernst and Jacki Anne Ernst, all of Hanover; nine grandchildren, Tyler Koontz, Matthew Koontz and his wife, Janelle, Ashlyn Ernst, Laci Ernst, Michael Felton, Brady Ernst, Gracie Ernst, Maeson Felton and John Ernst; two step grandchildren, Maverick Bair and Tanner Stambaugh; two great-grandchildren, Maddilyn and M.J. Manning; two brothers, James B. Ernst and his wife, Jean, and Daniel P. Ernst and his wife, Gloria; and a sister, Julie Zeigler and her husband, Thomas, all of Hanover. He was preceded in death by a brother, Robert L. Ernst. A memorial mass will be said at 10 AM Friday, January 11, 2019 at St. Joseph Catholic Church, 5125 Grandview Road, Hanover by The Rev. Matthew Morelli. Military honors will be rendered by the Hanover Allied Veterans Honor Guard. In lieu of flowers, memorial contributions may be made to St. Jude Children’s Research Hospital, 501 St. Jude Place, Memphis, TN 38105 or to the VNA Hospice of Hanover and Spring Grove, 440 N. Madison Street, Hanover, PA 17331.

The family of John J. "Jack" Ernst created this Life Tributes page to make it easy to share your memories.

Send flowers to the Ernst family.