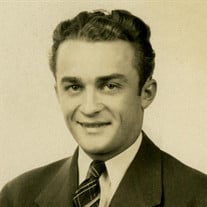 John R. “Dick” Herman, 94, of New Oxford, entered into God’s eternal care on Saturday, April 6, 2019 at the Cross Keys Village- The Brethren Home Community surrounded by his family. Born on Saturday, November 15, 1924 in New Oxford, he was a son of the late John W. and Bessie Mummert Herman and husband of nearly 59 years to the late Doris R. Herman who died in 2008. Dick attended New Oxford High School before entering the United States Army. He served during World War II in Kentucky, California and the Asiatic-Pacific Theater including New Guinea, Biak, Hollandia and Noemfoor before serving several months on Luzon, Philippine Islands. In 1988, he retired from Utz Quality Foods having worked as a route salesman. He was a member of Grace United Church of Christ in Hanover for more than 65 years. Survivors include numerous nieces and nephews to whom he was a favorite uncle; and his companion Ruth Jewell. He was preceded in death by four siblings, Raymond Herman, Evelyn Spies, Ethel Shorb and James W. Herman. The funeral will be held at 11AM on Saturday, April 13, 2019 at Panebaker Funeral Home & Cremation Care Center, Inc., 311 Broadway, Hanover with The Rev. Linda Titzell officiating. Burial will follow in New Oxford Cemetery. A viewing will be held one hour prior to the service. In lieu of flowers memorial contributions may be made in Dick’s name to Grace United Church of Christ, 100 Fourth Street, Hanover PA 17331 or the Good Samaritan Fund of Cross Keys Village- The Brethren Home Community, 2990 Carlisle Pike, New Oxford, PA 17350, where he lived since 1992.

The family of John R. "Dick" Herman created this Life Tributes page to make it easy to share your memories.

Send flowers to the Herman family.