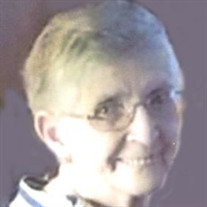 Jean M. Orendorff, 82, of Hanover, entered into God’s eternal care on Monday, June 18, 2018 at The Village at Utz Terrace. Born on Tuesday, March 10, 1936 in Hanover, she was a daughter of the late Lanton and Cora Lookenbill Sterner. She was also preceded in death by her husband of 33 years, Glenn S. Orendorff, who died in 1993; two brothers, Robert L. Sterner and Merle K. Sterner; and her sister, Janet M. Straley. A graduate of Eichelberger High School, she was an employee of Revonah Spinning Mill, Brooks Shoe Manufacturing Company and later retired from Wendy’s on Baltimore Street. Jean was a member of Trinity United Church of Christ. She enjoyed playing Bingo, watching television and spending time with her family. She will be remembered as being a warm and welcoming person. Survivors include her four nieces, Pamela Yingling and her husband, Bill, of Hanover, Jody Cruz of Phoenix, AZ, Jill Sterner of New York City, NY and Linda Sterner of Hanover; a nephew, Robert L. Sterner, Jr. and his wife, Judy, of Downington; her great-nieces and nephews, Eric Sanders and Hannah Yingling, both of Hanover, Elizabeth Cruz of Phoenix, Hillary Brogan and her husband, Derek, of West Chester and Kara Sterner and her husband, Kevin Hicswa, of Sciota, PA; and a sister-in-law, Manomma Sterner of Hanover. A funeral will be held at 11 a.m. Friday, June 22, 2018 at Panebaker Funeral Home & Cremation Care Center, Inc., 311 Broadway, Hanover with Chaplain Jennifer Murphy officiating. Burial will follow in Rest Haven Cemetery. The family will receive friends at a viewing from 6 to 8 p.m. Thursday at the funeral home. In lieu of flowers, memorial contributions may be made to the VNA of Hanover and Spring Grove, 440 Madison Street, Hanover, PA 17331 or to the American Cancer Society, 924-N Colonial Avenue, York, PA 17403.

Jean M. Orendorff, 82, of Hanover, entered into God&#8217;s eternal care on Monday, June 18, 2018 at The Village at Utz Terrace. Born on Tuesday, March 10, 1936 in Hanover, she was a daughter of the late Lanton and Cora Lookenbill Sterner.... View Obituary & Service Information

The family of Jean M. Orendorff created this Life Tributes page to make it easy to share your memories.

Send flowers to the Orendorff family.