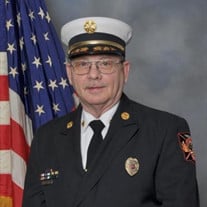 Jan Dee Cromer, 69, passed away March 30, 2022, at Long View Center for Rehabilitation and Healthcare in Manchester, MD. He is survived by his wife Joyce M. (Wonder) Cromer; son Jason D. Cromer and his wife, Valerie K. (Reid), of Hanover; two grandsons: Brady J. Cromer, of New Oxford and Gabriel M. Cromer, USMC, of Camp Pendleton, CA; four siblings: Michael E. Cromer and his wife, Bonnie, of McSherrystown, Jay A. Cromer and his wife, Sandy, of Hanover, Lynn H. Cromer and his wife, JoAnn, of Hanover, and Jean A. Bollinger and her husband, Jim, of Hanover; and many nieces, nephews, great nieces and nephews. He was preceded in death by a sister, Diane M. Cromer and a brother, Gabriel L. Cromer. Born November 13, 1952, in Hanover, he was a son of the late Kenneth Eugene and Doris Elizabeth (Gouker) Cromer. Jan was a 1970 graduate of Hanover High School. He opened his own business, Cromer's Electric, in 1975. While running his growing business, he also served his community by being a volunteer firefighter with Parkville Fire Company. Jan became a career firefighter, taking on the role of Penn Township Fire Chief in 2001. Jan retired from Hanover Area Fire Rescue Services March 31, 2017. Since retirement, he has been working with his son, Jason, as the General Manager for JDC & Sons Electrical and serving as a Penn Township Commissioner until the time of his passing. Jan was a life member of Hanover Area Fire Rescue, Southeastern Adams Volunteer Emergency Services, and Irishtown Fire Company. He was also a member of the Adams County Volunteer Emergency Services Association, Pennsylvania Career Fire Chief's Association, and the International Association of Fire Chiefs. Jan was a member of the McSherrystown and Hanover Home Associations, Hanover Eagles Aerie #1406, Hanover Loyal Order of Moose #227, AMVETS Post #22, and the Republican Club of Hanover. Jan and Joyce attended St. David's United Church of Christ in Hanover. Anyone who knew Jan, knows he cared for his family and community above everything else. He was one of the most dedicated and loyal people you would ever meet. When it came to work, Jan was like no other. He spent countless hours, unpaid, to ensure the community was kept safe, the financial status of the fire department was concrete, and no employee missed important events with their families. He earned the respect of so many other firefighters because of his knowledge, fearless attitude, and his bravery. His strong will would get any task complete, even if it meant not following the pack. Jan was not afraid to stand up for what was right, no matter the consequences. When not serving his local community, Jan loved riding his Harley Davidson motorcycle, hunting with his son and grandsons, camping with friends, vacationing in Ocean City, MD, where you would generally find him at the Cork Bar sipping on a Seven and Coke, and spending time with family. He will be missed by many, including his two dogs, Ember and Jaycee. We are all better individuals for knowing such an amazing man, a man that makes saying goodbye so incredibly difficult. A public service will be held Friday, April 8th at 1pm at the Hanover Area Fire & Rescue building located at 204 Clover Lane in Hanover. A private graveside memorial will be held immediately following the service, with Pastor Scott Sager officiating. Upon completion of the services, all are invited to join a celebration of life gathering at SAVES, 5865 Hanover Rd, Hanover PA. For those desiring, contributions may be made in Jan's name to Hanover Area Volunteer Fire/Rescue, PO Box 473, Hanover, PA 17331 and/or to the American Cancer Society, 1004 N. Juniata Street, Hollidaysburg, PA 16648.

The family of Jan D. Cromer created this Life Tributes page to make it easy to share your memories.

Send flowers to the Cromer family.