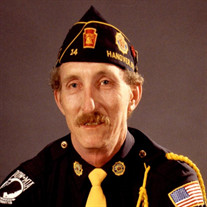 Herbert "Herb" Surrency, 77, of Hanover, entered into God’s eternal care on Friday, August 13, 2021 at UPMC Hanover Hospital. Born on Sunday, April 9, 1944 in Alma, GA, he was a son of the late Allen E. and Estelle Irene Lee Surrency. He was also preceded in death by his wife of 42 years, Dorothy A. Hippensteel Surrency, who died in 2008; three brothers, Harold, Grover and Hoover Surrency; a sister, Eunice Eason; and a son-in-law, James Tison. Herb proudly served his country in the Army National Guard. He retired from the former Hanover Wire Cloth in 2013 after more than 46 years of service. He was also employed by the Famous Hot Weiner and JC Penney. A member and past commander of the Harold H. Bair American Legion Post #14, he was also a member of the AmVets Post #22, Hanover Loyal Order of Moose #227, and was past president of the Hanover Democratic Club and the Hanover Community Progress Council. Herb was a member of the First United Methodist Church of Hanover and had attended Apostolic Ministries. Survivors include his daughter, Sherri L. Tison; two sisters, Eloise Dykes and Donna Surrency; many nieces and nephews; and his beloved dog, Smokey Joe. A memorial service will be held at 2:00 PM Wednesday, August 25, 2021 at Panebaker Funeral Home & Cremation Care Center, Inc., 311 Broadway, Hanover with Pastor N. Wayne Hammonds officiating. Military honors will be rendered by the Hanover Allied Veterans Honor Guard. The family will receive friends one hour prior to the service. In lieu of flowers, memorial contributions may be made to the New Hope Ministries, 135 Baltimore Street, Hanover, PA 17331.

The family of Herbert Surrency created this Life Tributes page to make it easy to share your memories.

Send flowers to the Surrency family.