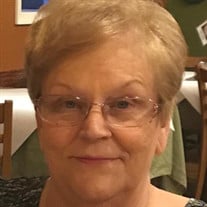 Hannah Isabelle Ritter, 79, of Gettysburg, passed away on Monday, April 19, 2021 at her daughter's home following a battle with cancer. Born on Thursday, August 14, 1941 in Rosedale, MD, she was a daughter of the late Ernest August and Jane Marcelene Beall Ruhe. She was preceded in death by her husband of 61 years, Paul Charles Ritter, who died in 2020; two sisters, Maryland "Mimi" Clevenger and Catherine "Candy" Swift and a step-brother, Arthur "Otts" Weiss. Hannah was employed for 15 years by the Bendix Corporation which later became Allied Signal. The family made many memories at Ocean City, MD and she was a Fisher's Popcorn fan. She was a very sweet and caring mother, showing her daughters the true meaning of unconditional love; she never raised her voice to them but instead stated, "wait until your father gets home." Hannah taught her daughters how to cook, but loved eating at local restaurants the older she became. Having a sweet tooth, she enjoyed chocolate and ice cream. She was an avid watcher of Fox News. Scratch-Off lottery tickets and penny slots gave her both entertainment and a little spending money over the years. She and her late husband called each other "their hobbies," spending so much of their time together. Survivors include three daughters, Terry Gerber and her husband, Tim, of Rehobeth Beach, DE, Susan Bonneville and her husband, Tom, of Finksburg, MD and Marci Nahory and her husband, Brian, of Hanover; eight grandchildren, Megan and Christopher Tudor, Eric Phillips and his girlfriend, Mckenzie Sprigg, Michael Phillips and his fiancee, Sam Knopp, Morgan Madrigal and her husband, Rolando, Caleb Nahory, Alexis Nahory and her boyfriend, Tymon Noss, and Alyssa Nahory; two great-grandchildren, Olivia and Braxton Madrigal, with a third great-grandchild due in the near future; and an aunt, Susan Beall of Carney, MD The graveside service will be held at 12 pm Thursday, April 22. 2021 at Mount Olivet Cemetery, 725 Baltimore Street, Hanover with The Rev. M David Kiel officiating. Prior to the service, the family will receive friends at a viewing from 10:30 am to 11:30 am at Panebaker Funeral Home & Cremation Care Center, Inc., 311 Broadway, Hanover. In compliance with health and public safety directives, those attending will be required to wear masks, be socially distanced and attendance inside the funeral home will be limited. Memorial contributions may be made to American Cancer Society, 924 N Colonial Ave, York, PA 17403.

Hannah Isabelle Ritter, 79, of Gettysburg, passed away on Monday, April 19, 2021 at her daughter's home following a battle with cancer. Born on Thursday, August 14, 1941 in Rosedale, MD, she was a daughter of the late Ernest August and Jane... View Obituary & Service Information

The family of Hannah Isabelle Ritter created this Life Tributes page to make it easy to share your memories.

Hannah Isabelle Ritter, 79, of Gettysburg, passed away on Monday,...

Send flowers to the Ritter family.